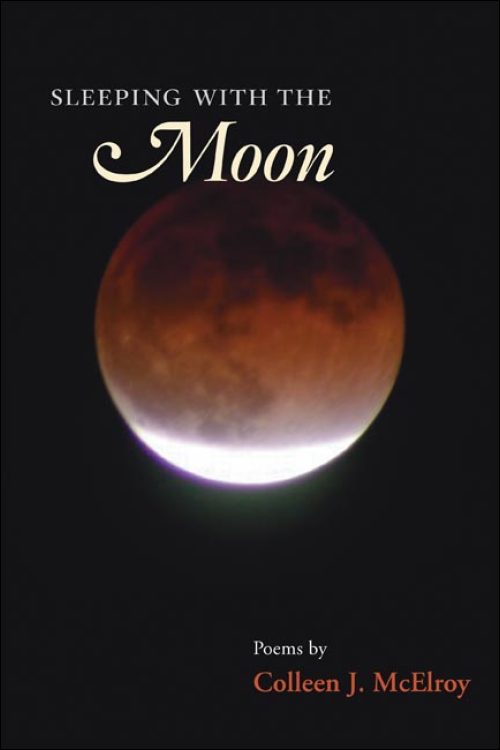 Sleeping with the Moon

Colleen J. McElroy's poetry shoots for the moon, and takes it in, too, in one way after another. The collection's award-winning poems animate women's experiences of sex, shopping, and dancing, while offering telling insight into the struggles and silver lining of lust, love, illness, and aging. Rich with vivid imagery and candid storytelling, Sleeping with the Moon takes readers on moonlit adventures under the night sky, through the barroom's smoky haze, and under the covers.

Colleen J. McElroy is a professor emerita of English and creative writing at the University of Washington, Seattle, and the author of several poetry collections, including Traveling Music.

“She will happily give the MFAs a headache with her unfashionably clear statements and heartbroken admissions and the bold planting, in almost every poem, of the moon, which she annexes to her purposes, only sometimes romantic.”--PoetryFoundation.org

"Colleen J. McElroy is an extraordinary poet whose work is both lyrical and feisty. Sleeping with the Moon contains sexual love poems that will thrill women 'of a certain age.' Read this book!"--Carolyn Kizer

"The moon in all its phases serves as the unifying symbol for these elegiac poems of loss and desire. Poignant and nostalgic, they range from references to Eartha Kitt and Bessie Smith to the Brothers Grimm, and speak to the reader in language that is sometimes strongly colloquial and often tender yet unsentimental."--Maxine Kumin

"Sleeping with the Moon is a voyage, a map of images that captures what we humans do to survive with grace. The revelations unfold one after the other, enlarging this needful journey, each poem caught in its profound imagery and poignant singing, until we become suspended in a music that enlightens."--Yusef Komunyakaa