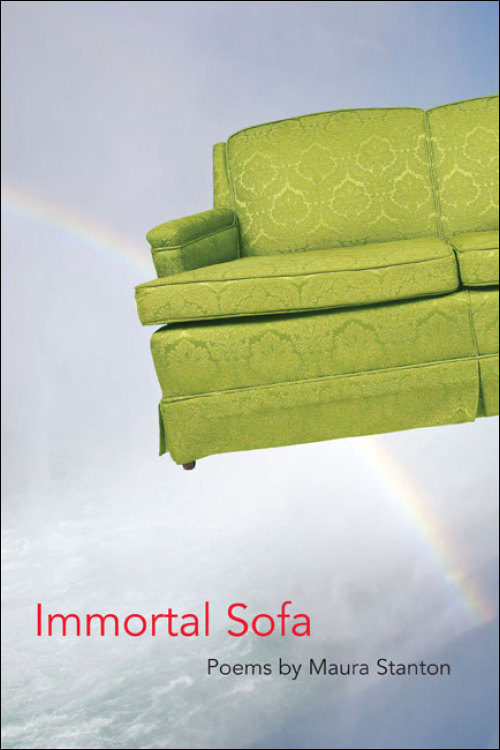 In accessible poems full of rich detail and painterly images, Maura Stanton looks under the surface of the ordinary, hoping to find the magic spark below the visible. In poems both humorous and elegaic, she gathers strange facts, odd events, and overlooked stories to construct her own vision of immortality, one made up of fragments of history and geography and the illusions of yearning human beings. From elephants in Ceylon to Nazi prisoners in Ireland, from Beowulf to Jane Austen, from sonnets to prose poems to blank verse, Immortal Sofa conjures our complex existence in all its sorrowful but astonishing variety.

Maura Stanton is a professor of English and creative writing at Indiana University. She has published five books of poetry, including Snow on Snow and Glacier Wine, as well as a novel and three collections of short stories. Her poems and stories have appeared in The American Poetry Review, Poetry, The Paris Review, Ploughshares, The Chicago Tribune, The Antioch Review, and The New Yorker.

"Maura Stanton presents us with a world of abundance and careful discrimination, a world that deserves the same king of assiduous attention that has gone into making these poems."--Prairie Schooner

"My ultimate impression is of a poet of snow and flame, one who conveys a sense of burning reality, of the strange fire within and without, crackling with spirit and invention."--Stanley Kunitz, from the foreword to Snow on Snow

"Imagination and reality intersect, lending weight to the fantasies and a numinous dimension to ordinary lives."--Ben Howard, Poetry

"Stanton's aesthetic has given rise to poems that are personal without being solipsistic, introspective without being involuted, and firmly conceived without being rigid--poems that for all their intricacy are surprisingly free of obscurity."--Ann Shifrer Firmage, Quarterly West