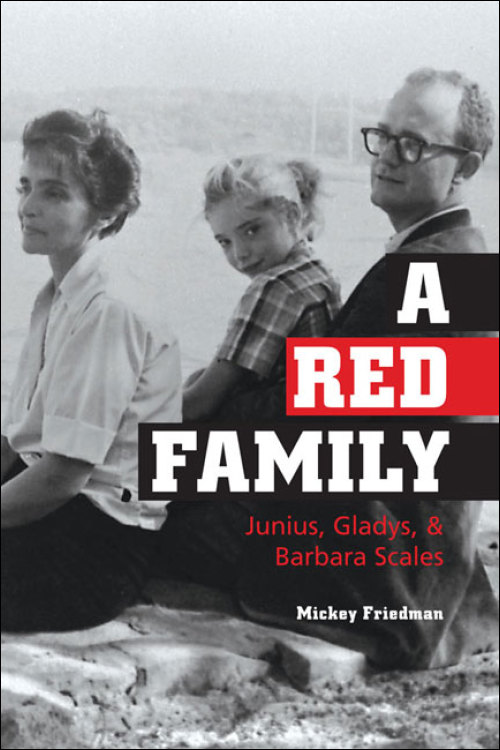 One of the few publicly known communists in the South, Junius Scales organized textile workers, fought segregation, and was the only American to be imprisoned under the membership clause of the Smith Act during the McCarthy years. This compact collective memoir, built on three interconnected oral histories and including a historical essay by Gail O'Brien, covers Scales's organizing activities and work against racism in the South, his progressive disillusionment with Party bureaucracy and dogmatic rigidity, his persecution and imprisonment, as well as his family's radicalism and response to FBI hounding and blacklisting.Through the distinct perspectives of Junius, his wife Gladys, and his daughter Barbara, this book deepens and personalizes the story of American radicalism. Conversational, intimate, and exceptionally accessible, A Red Family offers a unique look at the American communist experience from the inside out.

Mickey Friedman is a documentary filmmaker and writer and the founder of Blue Hill Films, where he has directed several films, including Good Things to Life: GE, PCBs, and Our Town. He lives in Massachusetts. Gail O'Brien is a professor emerita of history at North Carolina State University and the author of The Color of the Law: Race, Violence, and Justice in the Post-World War II South.

“This book fascinates by entwining personal history with wider US history; the interviews evoke the atmosphere of racism in the South and the frightening isolation caused by the McCarthy witchhunts but also the warmth of comradeship and the persistence of their vision of a better world.”--Socialist Review

"A welcome addition to the literature on southern radicalism."--Journal of Southern History

"A powerful reminder of the sacrifices made to make racial and labor justice a reality."--People's Weekly World

"An extraordinary set of reminiscences, beautifully put together by an extremely sensitive, even gifted interviewer. It is a jewel."--Glenda Gilmore, author of Defying Dixie: The Radical Roots of Civil Rights, 1919-1950

"With extremely rich, intelligent, and honest reflections, A Red Family speaks to a host of issues that are relevant to an important emerging debate among historians of American labor and the Left. Junius Scales's recollections address fundamental problems in the history of American communism in a way that should prove valuable to historians who want to avoid both uncritical adulation and the 'red menace' caricature on offer in much of the current work."--Brian Kelly, author of Race, Class, and Power in the Alabama Coalfields, 1908-21

"Junius Scales is a fascinating character whose experiences tell us so much about his period, and Friedman's family approach opens up new angles on the story."--James R. Barrett, author of William Z. Foster and the Tragedy of American Radicalism"A welcome addition to the literature on southern radicalism."Journal of Southern History

Read more about the book on the author's site.A Red Family, Obama, and the Continuing American Revolution by Mickey Friedman