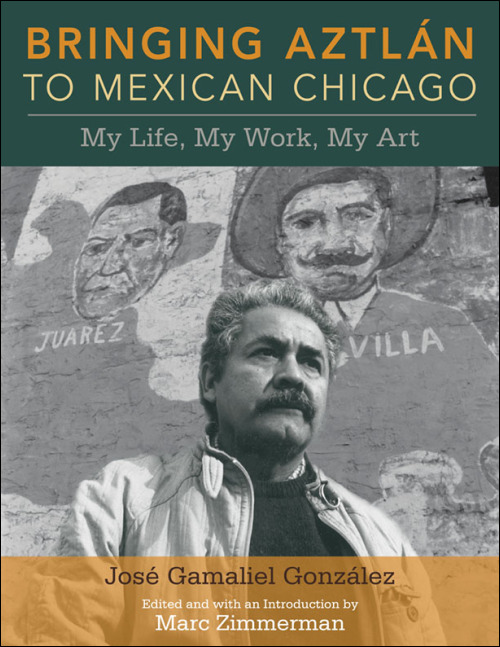 Bringing Aztlán to Mexican Chicago is the autobiography of José Gamaliel González, an impassioned artist willing to risk all for the empowerment of his marginalized and oppressed community. Through recollections emerging in a series of interviews conducted over a period of six years by his friend Marc Zimmerman, González looks back on his life and his role in developing Mexican, Chicano, and Latino art as a fundamental dimension of the city he came to call home.

Born near Monterrey, Mexico, and raised in a steel mill town in northwest Indiana, González studied art at the School of the Art Institute of Chicago and the University of Notre Dame. Settling in Chicago, he founded two major art groups: El Movimiento Artístico Chicano (MARCH) in the 1970s and Mi Raza Arts Consortium (MIRA) in the 1980s.

With numerous illustrations, this book portrays González's all-but-forgotten community advocacy, his commitments and conflicts, and his long struggle to bring quality arts programming to the city. By turns dramatic and humorous, his narrative also covers his bouts of illness, his relationships with other artists and arts promoters, and his place within city and barrio politics.

José Gamaliel González is a Chicago-based artist and arts organizer. Marc Zimmerman teaches in the department of modern and classical languages at the University of Houston. His many books include U.S. Latino Literatures and Orbis/Urbis Latino: Los "Hispanos" en las ciudades de los Estados Unidos.

"[Editor] Zimmerman has filled an important need to document the life and art of José González . . . . the story, politics, and images are an important part of the history of Chicago and of the Latino community there."--Studies in Latin American Popular Culture

"Gonzalez was a tireless and forceful artist-activist who struggled to promote Latino arts in the community and mainstream. His life story gives the reader a glipse into the rise of Latino popular art and politics. His autobiography fills a substantial gap in the cultural history of Chicago's Latino community."--Latino Studies

"A unique contribution to the story of Latino arts. Bringing Aztlán to Mexican Chicago reveals a highly personal story of one participant's involvement in events that illuminate the difficulties, obstacles, and conflicts he experienced in the arts movement."--Theresa Delgadillo, assistant professor of comparative studies at Ohio State University