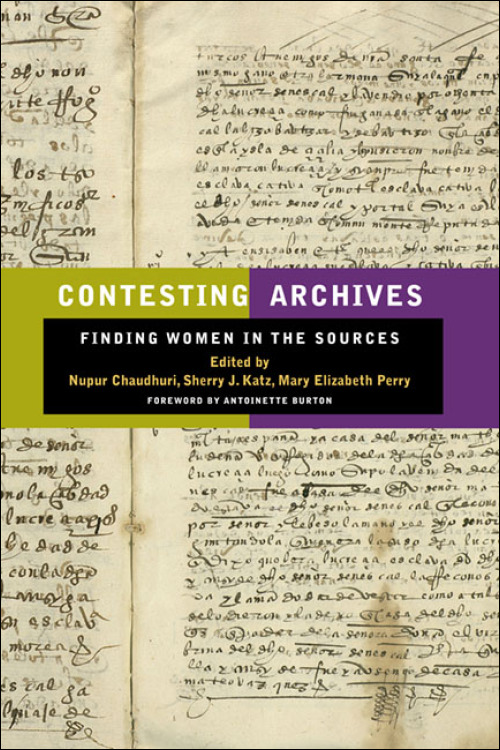 The contributors of Contesting Archives challenge the assumption that an archive is a neutral, immutable, and a historical repository of information. Instead, these historians view it as a place where decisions are made about whose documents--and therefore whose history--is important. Finding that women's voices and their texts were often obscured or lost altogether, they have developed many new methodologies for creating unique archives and uncovering more evidence by reading documents "against the grain," weaving together many layers of information to reveal complexities and working collectively to reconstruct the lives of women in the past.

Nupur Chaudhuri is a professor of history at Texas Southern University and the coeditor of Voices of Women Historians: Personal, Professional, and Political. Sherry J. Katz is a lecturer in the department of history at San Francisco State University. Mary Elizabeth Perry is a retired professor of history at Occidental College and a research associate at the UCLA Center for Medieval and Renaissance Studies. She is the author of The Handless Maiden: Moriscos and the Politics of Religion in Early Modern Spain.

"A compelling exploration of topics in women's and gender history across several continents and through several centuries."--The American Archivist

"A pleasure to read. . . . A terrific primer on how to research the seemingly invisible and silent."--Pacific Historical Review."--

"Contesting Archives makes vivid and concrete the way historians must proceed when faced with partial or contradictory sources. Historians and anyone interested in how historians work will appreciate the authors' strategies for, and cautions about, unearthing information about women from documents inside and outside the archive."--Margaret Strobel, coeditor of Expanding the Borders of Women's History

Received the Barbara "Penny" Kanner Prize from the Western Association of Women Historians, 2011.