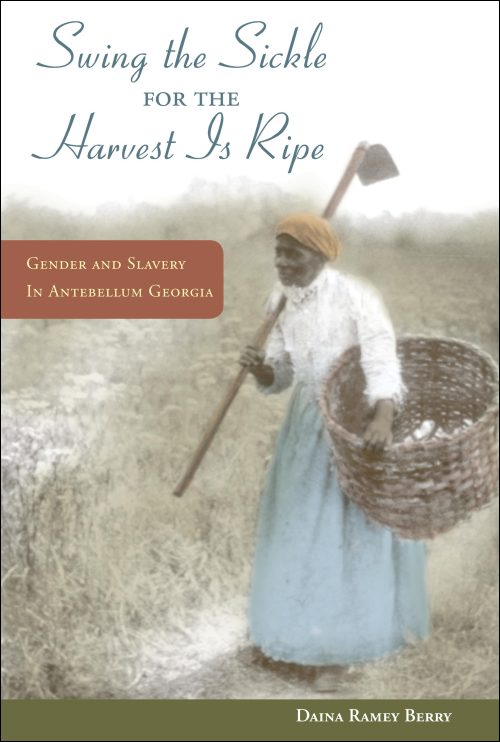 "Swing the Sickle for the Harvest Is Ripe" compares the work, family, and economic experiences of enslaved women and men in upcountry and lowcountry Georgia during the nineteenth century. Mining planters' daybooks, plantation records, and a wealth of other sources, Daina Ramey Berry shows how slaves' experiences on large plantations, which were essentially self-contained, closed communities, contrasted with those on small plantations, where planters' interests in sharing their workforces allowed slaves more open, fluid communications. By inviting readers into slaves' internal lives through her detailed examination of domestic violence, separation and sale, and forced breeding, Berry also reveals important new ways of understanding what it meant to be a female or male slave, as well as how public and private aspects of slave life influenced each other on the plantation.

Daina Ramey Berry is an associate professor of history at Michigan State University.

"'Swing the Sickle' demonstrates how far gender has come as a category of historical analysis in slave studies. It displays refinement, nuance, and balance . . . it brings together gender, work, family, and economy in an easily accessible, readable account useful to slave scholars and students of Georgia slavery in particular."--Georgia Historical Quarterly

"Reconstructing the practices of slavery from plantation records, memoirs, and newspapers and the encounter with those practices through folk songs and ex-slave testimonies, Berry succeeds in capturing commonalities and differences in slavery in white-majority communities and African American-majority communities. . . . [An] important contribution to historiography. Recommended."--Choice

"[Berry's] approach reveals new ways of looking at slavery. . . . Berry also raises questions about the relationship between southern and northern ideologies of labor and emerging definitions of what constituted work and skill in the nineteenth-century United States."--Journal of Southern History

"Berry's book contributes to our understanding about how slaveholders attempted to control slave labor and what men and women did to shape family lives within the confines of enslavement."--American Historical Review

"Berry's study is filled with rich, personal stories that, together with its brevity, make it an engaging book for use in undergraduate instruction. Berry has provided us with a useful overview of the significance of gender in shaping the experiences of enslaved laborers in antebellum Georgia."--Journal of the Early Republic

"A well-researched and written book, readers interested in the history of African Americans, women, labor, slavery, and Georgia will find this book useful."--Civil War Book Review

"Berry's book adds a great deal to our understanding of the variety and complexity of slave life and makes a valuable contribution to scholarship both about Georgia and the antebellum South as a whole."--Journal of Interdisciplinary History

"Berry's fresh approach to studying slavery in Georgia includes new discussions of gender exploitation, family, and worker's skills. 'Swing the Sickle for the Harvest Is Ripe' makes a tremendous contribution to the field, as it makes important connections between labor, skill and gender, forced breeding, and the informal economy."--Deborah Gray White, author of Ar'n't I a Woman?: Female Slaves in the Antebellum South and Too Heavy a Load: Black Women in Defense of Themselves, 1894-1994

"An appeal of this book is that it compares communities in upcountry and lowcountry Georgia to provide a gendered analysis of the family, labor, and economy of enslaved women and men during the antebellum period. Berry's distinctive focus will be useful for scholars and students in the fields of African American history, women's studies, gender studies, family history, and U.S. history before 1876."--Wilma King, author of The Essence of Liberty: Free Black Women during the Slave Era