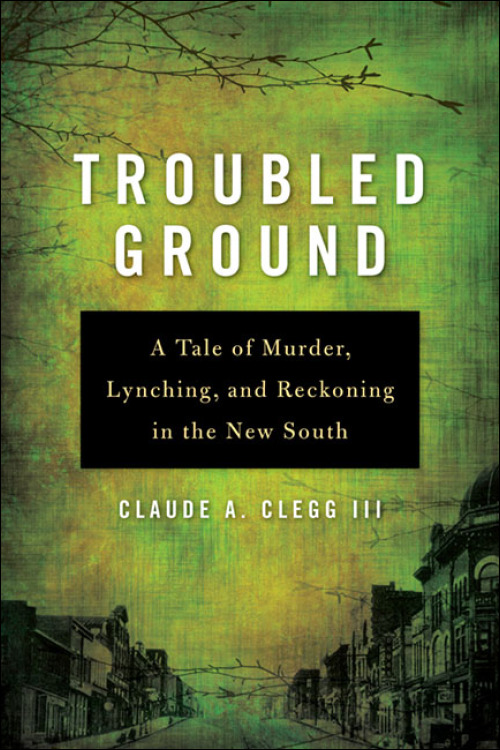 In Troubled Ground, Claude A. Clegg III revisits a violent episode in his hometown's history that made national headlines in the early twentieth century but disappeared from public consciousness over the decades. Moving swiftly between memory and history, between the personal and the political, Clegg offers insights into southern history, mob violence, and the formation of American race ideology while coming to terms on a personal level with the violence of the past.

Three black men were killed in front of a crowd of thousands in Salisbury, North Carolina, in 1906, following the ax murder of a local white family for whom the men had worked. One of the lynchers was prosecuted for his role in the execution, the first conviction of its kind in North Carolina and one of the earliest in the country. Yet Clegg, an academic historian who grew up in Salisbury, had never heard of the case until 2002 and could not find anyone else familiar with the case.

In this book, Clegg mines newspaper accounts and government records and links the victims of the 1906 case to a double lynching in 1902, suggesting a long and complex history of lynching in the area while revealing the determination of the city to rid its history of a shameful and shocking chapter. The result is a multilayered, deeply personal exploration of lynching and lynching prosecutions in the United States.

Claude A. Clegg III is a professor of history at Indiana University and the author of The Price of Liberty: African Americans and the Making of Liberia and An Original Man: The Life and Times of Elijah Muhammad.

"A fine book, deeply researched and elegantly written, that tells us some very important things about the relationship between lynching and the modernizing state in the early twentieth century."--Florida Historical Quarterly

"Clegg provides a laudably clear and accessible narrative. Clegg successfully grounds his analysis in the local context, impressively reconstructing the relationships and the conflicts that sparked the 1906 lynchings. In sum, Troubled Ground is an excellent book and deserves a wide audience."--Louisiana History

"In this crisp and trenchant account of a North Carolina lynching that was at once tragically commonplace and surprisingly exceptional, Claude A. Clegg III deftly combines local history of the highest caliber with an impressive command of the latest scholarship on lynching and an eye for the broadest implications of his story."--W. Fitzhugh Brundage, author of The Southern Past: A Clash of Race and Memory

"This compelling microhistory of several North Carolina lynchings adeptly locates the significance of these events in the matrix of local race relations. Deeply researched and sensitive to nuance and complexity, Troubled Ground viscerally and appealingly reconstructs historical events pivotal to an understanding of the history of lynching and criminal justice."--Michael J. Pfeifer, author of Rough Justice: Lynching and American Society, 1874–1974