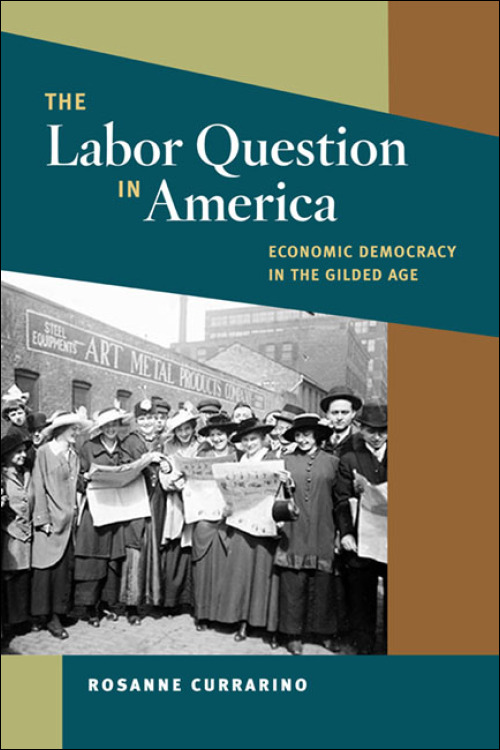 The Labor Question in America

In The Labor Question in America: Economic Democracy in the Gilded Age, Rosanne Currarino traces the struggle to define the nature of democratic life in an era of industrial strife. As Americans confronted the glaring disparity between democracy's promises of independence and prosperity and the grim realities of economic want and wage labor, they asked, "What should constitute full participation in American society? What standard of living should citizens expect and demand?" Currarino traces the diverse efforts to answer these questions, from the fledgling trade union movement to contests over immigration, from economic theory to popular literature, from legal debates to social reform. The contradictory answers that emerged--one stressing economic participation in a consumer society, the other emphasizing property ownership and self-reliance--remain pressing today as contemporary scholars, journalists, and social critics grapple with the meaning of democracy in postindustrial America.

Rosanne Currarino is an associate professor of history at Queen's University in Kingston, Ontario, Canada.

"Rosanne Currarino has provided a nuanced, deeply informed reading of the complex intellectual and cultural currents that shaped the labor question in the late nineteenth century. This is quite simply a marvelously informative book."--The Journal of the Gilded Age and Progressive Era

"This is an important work, one of the most important recent books, not only in labor history, but in social theory. Filled with insights and surprising twists, it repays a careful reading and rereading. It is a model study; I have added it to my graudate reading lists and urge everyone to do the same."--Labor History

"This book is a valuable contribution to the history of the Gilded Age, as it provides scholars of the period with a concise intellectual history to better position studies of workers themselves."--Labor: Studies in Working-Class History of the Americas

"More a cultural history of the debates over the role of labor in American life than a history of labor activities themselves. This book packs a surprisingly large volume of historical content and sophisticated argument into a slim volume."--History Teacher

"Currarino's book will enable readers to understand the transformations that took place during the Gilded Age, not only in the minds of workers but also in American society as a whole. . . . An impressive accomplishment."--Business History Review

"A compelling case that economic democracy requires the full participation of the American working class in the economic life of the nation as both workers and consumers."--H-Net Reviews

"Currarino has identified a vital shift in the debate over the meaning of democracy in a nation where such a large portion of its citizens were dependent upon others for their livelihoods."--American Historical Review

"This splendidly researched cultural and intellectual history of the 'labor question' during the Gilded Age offers a masterful explanation of the move from a producerist to a consumerist understanding of citizenship and labor. The Labor Question in America will be widely read by students and scholars of the labor movement, the development of twentieth-century liberalism, and the history of the Gilded Age."--Lawrence M. Lipin, author of Workers and the Wild: Conservation, Consumerism, and Labor in Oregon, 1910-30