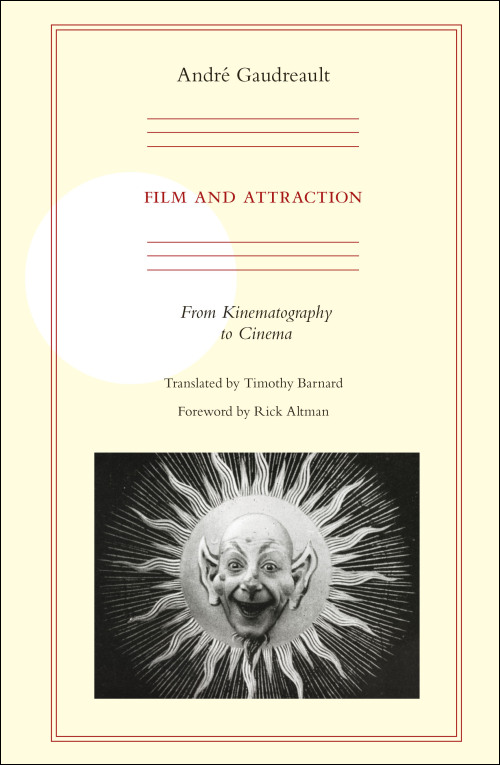 Establishing a new vision for film history, Film and Attraction: From Kinematography to Cinema urges readers to consider the importance of complex social and cultural forces in early film. André Gaudreault argues that Edison and the Lumières did not invent cinema; they invented a device. Explaining how this device, the kinematograph, gave rise to cinema is the challenge he sets for himself in this volume. He highlights the forgotten role of the film lecturer and examines film's relationship with other visual spectacles in fin-de-siècle culture, from magic sketches to fairy plays and photography to vaudeville. In reorienting the study of film history, Film and Attraction offers a candid reassessment of Georges Méliès' rich oeuvre and includes a new, unabridged translation of Méliès' famous 1907 text "Kinematographic Views." A foreword by Rick Altman stresses the relevance of Gaudreault's concerns to Anglophone film scholarship.

André Gaudreault is a professor at the Département d’histoire de l’art et d’études cinématographiques at the Université de Montréal, the author of From Plato to Lumière: Narration and Monstration in Literature and Cinema, and the editor of American Cinema 1890–1909: Themes and Variations. Timothy Barnard is a film historian, publisher, and translator.

"This work could indeed help rewrite the history of 'early cinema.' Highly recommended."--Choice

"A tour de force. The many historical references to specific uses of cinematic terms that are summoned by the author are impressive and can be accomplished only by a scholar with long and substantial experience working in the field. Books on film historiography as insightful, substantial, and concise as this one are rare."--Charles O'Brien, author of Cinema's Conversion to Sound: Technology and Film Style in France and the U.S.

Author received the Jean Mitry Prize given by the Giornate del Cinema Muto, honoring individuals who contribute to the advancement of history and recognition of silent cinema, 2010.