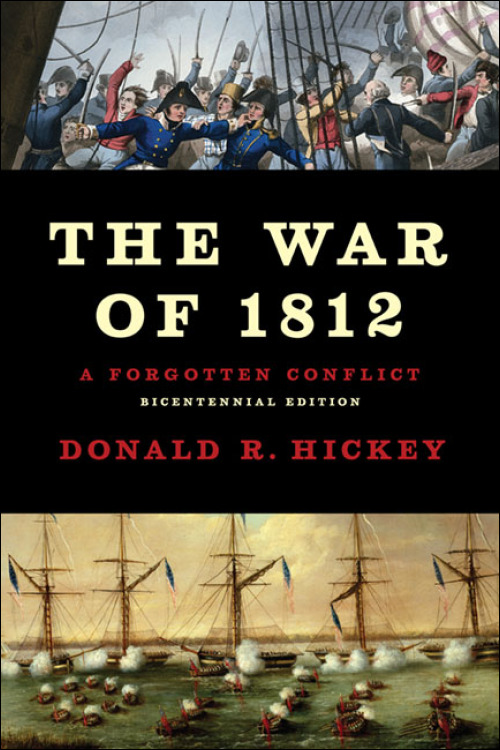 This comprehensive and authoritative history of the War of 1812, thoroughly revised for the 200th anniversary of the historic conflict, is a myth-shattering study that will inform and entertain students, historians, and general readers alike. Donald R. Hickey explores the military, diplomatic, and domestic history of our second war with Great Britain, bringing the study up to date with recent scholarship on all aspects of the war, from the Gulf of Mexico to Canada.

The newly expanded The War of 1812: A Forgotten Conflict, Bicentennial Edition includes additional information on the British forces, American Indians, and military operations such as the importance of logistics and the use and capabilities of weaponry. Hickey explains how the war promoted American nationalism and manifest destiny, stimulated peacetime defense spending, and enhanced America's reputation abroad. He also shows that the war sparked bloody conflicts between pro-war Republican and anti-war Federalist neighbors, dealt a crippling blow to American Indians, and solidified the United States's antipathy toward the British.

Donald R. Hickey is a professor of history at Wayne State College in Wayne, Nebraska. He is the author of seven books, including Don't Give Up the Ship! Myths of the War of 1812, and numerous articles.

"A well-researched and extensively documented overview of the causes and consequences of the War of 1812. In a penetrating analysis of prewar society, the author accumulates evidence suggesting that the war was ultimately unnecessary and unpopular. . . . Highly recommended as an inclusive political, military, and social treatment of a customarily neglected war."--American Library Association Booklist

"Despite being forgotten and overlooked, the War of 1812 was a significant milestone in the development of the United States. [Hickey] was accurate when he wrote, 'Although looking to the past, the war was fraught with consequences for the future, and for this reason it is worth studying today.' And there is no better place to start than with The War of 1812."--Civil War News

"The definitive study."--Journal of American History

"Donald Hickey took a decade and a half's worth of research and teaching on America's most obscure war to write a monograph accessible to general readers and useful to historians who wanted more than strickly military history. Hickey has provided an excellent, almost encyclopedic, yet engaging narrative of the War of 1812. . .a mature historian's life's work. . . .This is the best single volume on the War of 1812."--Fides Et Historia

"A finely crafted narrative that provides an excellent introduction to the multiple causes and political upheavals (among elite whites in the United States)."--N-Net Reviews - H-War