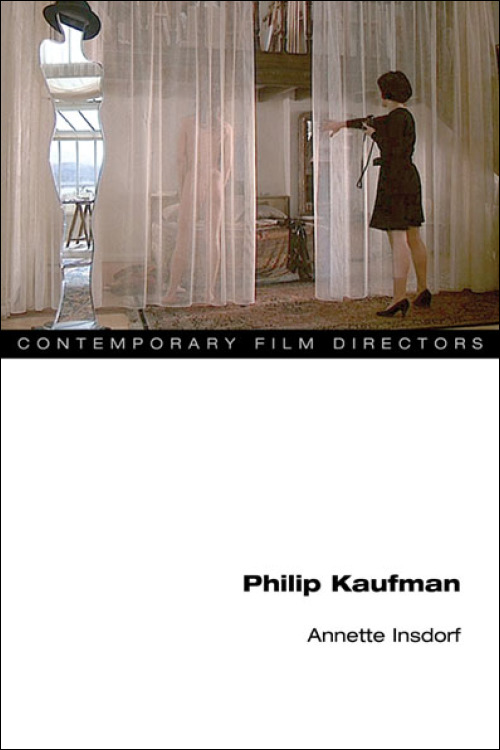 American director Philip Kaufman is hard to pin down: a visual stylist who is truly literate, a San Franciscan who often makes European films, he is an accessible storyteller with a sophisticated touch. Celebrated for his vigorous, sexy, and reflective cinema, Kaufman is best known for his masterpiece The Unbearable Lightness of Being and the astronaut saga The Right Stuff. His latest film, Hemingway & Gellhorn (premiering May 2012 on HBO), stars Nicole Kidman and Clive Owen.

In this study, Annette Insdorf argues that the stylistic and philosophical richness of Kaufman's cinema makes him a versatile auteur. She demonstrates Kaufman's skill at adaptation, how he finds the precise cinematic device for a story drawn from seemingly unadaptable sources, and how his eye translates the authorial voice from books that serve as inspiration for his films. Closely analyzing his movies to date (including Invasion of the Body Snatchers, The Wanderers, and Quills), Insdorf links them by exploring the recurring and resonant themes of sensuality, artistic creation, codes of honor, and freedom from manipulation. While there is no overarching label or bold signature that can be applied to his oeuvre, she illustrates the consistency of themes, techniques, images, and concerns that permeates all of Kaufman's works.

Annette Insdorf is the director of undergraduate film studies at Columbia University's School of the Arts. Her books include Francois Truffaut; Double Lives, Second Chances: The Cinema of Krzysztof Kieslowski; and Indelible Shadows: Film and the Holocaust.

"A thoughtful, scholarly study of one of America’s most underrated filmmakers."--Leonard Maltin

"A shrewd and very readable study."--Filmmaker

"A study so closely tuned to his work and so neatly supplemented with his own insights from interviews and e-mails that it reads like a biography of an oeuvre."--The New Yorker online

"Philip Kaufman is a shrewd and very readable study. It seeks not only to locate Kaufman's distinct visual style and philosophical bent across his body of work, but also to elevate Kaufman to a unique niche in American and world cinema: as a Euro-style auteur living in the U.S. in the age of commercial cinema, whose work across genres resists easy categorization but nonetheless resonates for its freshness of perception about the human condition and the codes of behavior that both restrict and liberate us."--Filmmaker Magazine

"Annette Insdorf's incisive and sympathetic book grants Kaufman the place in the pantheon he deserves."--Roger Ebert

"It could take only a great scholar of film to understand and appreciate the work of one of our great quintessential American filmmakers, and Annette Insdorf, in her masterly and captivating study of Philip Kaufman, does just that. This book is insightful, perceptive, and confident, and like Kaufman's films, it repays the reader's attention generously and with great compassion and humanity."--Ken Burns

"This is the kind of auteur study that talks about both style and sensibility, and does so with elegance, precision, and an inside-out sort of sweep. I can offer no higher praise than this: the book fully honors Philip Kaufman's oeuvre."--Michael Sragow, author of Victor Fleming: An American Movie Master

"With commitment and enthusiasm, Annette Insdorf excels at thematic and formal discussions in this enlightening introduction to the films of Philip Kaufman. The book will become the authoritative word on Kaufman's films, a must for all scholars and fans of his work."--Edward Baron Turk, author of Hollywood Diva: A Biography of Jeanette MacDonald