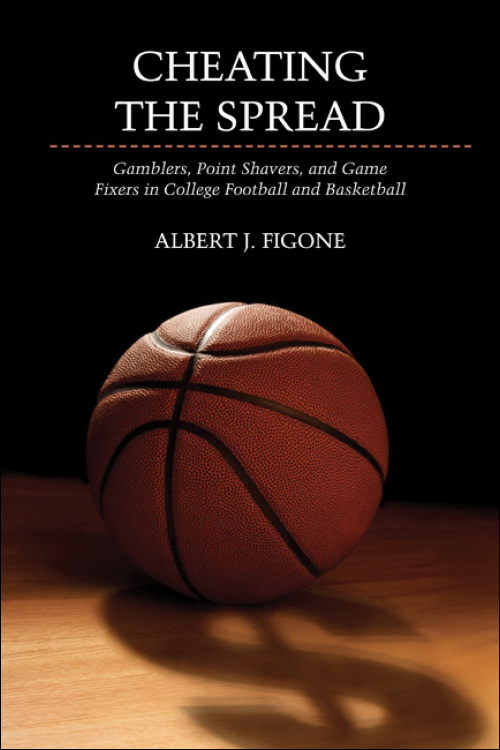 Delving into the history of gambling and corruption in intercollegiate sports, Cheating the Spread recounts all of the major gambling scandals in college football and basketball. Digging through court records, newspapers, government documents, and university archives and conducting private interviews, Albert J. Figone finds that game rigging has been pervasive and nationwide throughout most of the sports' history. The insidious practice has spread to implicate not only bookies and unscrupulous gamblers but also college administrators, athletic organizers, coaches, fellow students, and the athletes themselves.

Naming the players, coaches, gamblers, and go-betweens involved, Figone discusses numerous college basketball and football games reported to have been fixed and describes the various methods used to gain unfair advantage, inside information, or undue profit. His survey of college football includes early years of gambling on games between established schools such as Yale, Princeton, and Harvard; Notre Dame's All-American halfback and skilled gambler George Gipp; the 1962 allegations of insider information between Alabama coach Paul "Bear" Bryant and former Georgia coach James Wallace "Wally" Butts; and many other recent incidents. Notable events in basketball include the 1951 scandal involving City College of New York and six other schools throughout the East Coast and the Midwest; the 1961 point-shaving incident that put a permanent end to the Dixie Classic tournament; the 1978 scheme in which underworld figures recruited and bribed several Boston College players to ensure a favorable point spread; the 1994–95 Northwestern scandal in which players bet against their own team; and other recent examples of compromised game play and gambling.

Albert J. Figone has seen sports from all sides. He is a professor emeritus of kinesiology and a former head baseball and assistant football coach at Humboldt State University, and he previously coached football, baseball, and track at California high schools. He lives in Folsom, California.

"A compelling, informative look into the dark side of collegiate athletics."--Booklist

"An informative account illustrating the nature of incentives in big-time college athletics. It should be required reading for any serious student of college athletics."--The International Journal of the History of Sport

"Cheating the Spread is an important study that usefully synthesizes existing literature on college sports gambling and the major scandals and provides a wealth of new information gleaned from heretofore untapped sources. The exhaustive research has a comprehensive sweep that is stunning."--Richard O. Davies, author of Sports in American Life: A History