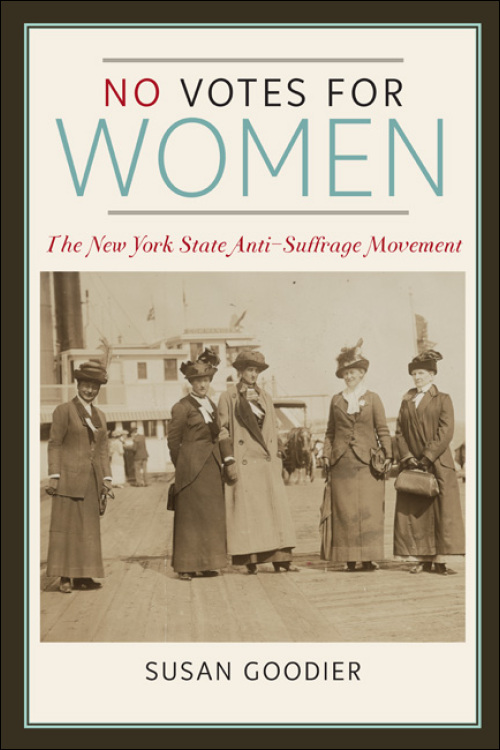 No Votes for Women

No Votes for Women: The New York State Anti-Suffrage Movement explores the complicated history of the suffrage movement in New York State by delving into the stories of women who opposed the expansion of voting rights to women. Susan Goodier makes the case that, contrary to popular thought, women who opposed suffrage were not against women's rights. Instead, conservative women who fought against suffrage encouraged women to retain their distinctive feminine identities as protectors of their homes and families, a role they felt was threatened by the imposition of masculine political responsibilities.

Goodier details the victories and defeats on both sides of the movement from its start in the 1890s to its end in the 1930s, analyzing not only how local and state suffrage and anti-suffrage campaigns impacted the national suffrage movement, but also how both sides refined their appeals to the public based on their counterparts' arguments. Rather than condemning the women of the anti-suffragist movement for accepting or even trying to preserve the status quo, No Votes for Women acknowledges the powerful activism of this often overlooked and misunderstood political force in the history of women's equality.

Susan Goodier is a lecturer in history at SUNY Oneonta, an editor for the journal New York History, and a public scholar for Humanities New York.

"Goodier provides a compelling study of the female-led anti-suffrage movement in New York. A valuable addition to the study of women's suffrage and voting in the US. Highly recommended."--Choice

"Goodier adds to the historical discussion an emphasis on the interaction between the 'suffs' and the 'antis' and her focus on the differing impact of World War I on the anti-suffrage movement is also important. Another significant contribution of the work is to highlight the fact that antisuffrage women did not share the suffragists' dilemma over whether to join the traditional political parties after ratification."--The Journal of American History

"This book rescues at last some of the anti-suffragists from their stereotyped oblivion as the puppets of hostile male interests and reintroduces them as committed activist women who disagreed with suffragists for their own carefully considered reasons. Thus it is a valuable contribution to suffrage studies that enriches our understanding of the complexities and consequences of this important movement."--American Historical Review

"Goodier has demonstrated the important role the Great War played in affecting domestic political campaigns. Any scholar interested in woman's rights, conservatism, or New York history will learn a tremendous amount from the work. And no future scholar studying either the suffrage movement or the anti-suffrage campaign will be able to think about the subject without first taking Goodier's analysis into full consideration."--The Hudson River Valley Review

"A valuable contribution to suffrage studies that enriches our understanding of the complexities and consequences of this important movement."--American Historical Review

"By focusing on New York, Goodier is able to devote particular attention to two suffrage referenda that took place in that state in 1915 and 1917, and here she makes an important contribution to scholarship. . . . An innovative account of the 1917 New York referendum that will command the attention of all scholars who seek to understand the vicissitudes of the women's movement."--The Journal of the Gilded Age and Progressive Era