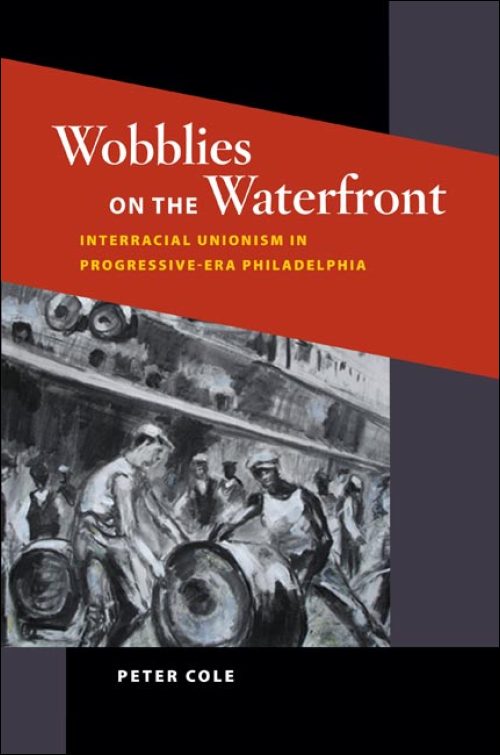 Wobblies on the Waterfront

For almost a decade during the 1910s and 1920s, the Philadelphia waterfront was home to the most durable interracial, multiethnic union seen in the United States prior to the Congress of Industrial Organizations (CIO) era. In a period when most unions, like many institutions, excluded blacks or segregated them, the Industrial Workers of the World (IWW) was ideologically committed to racial equality. More than any other IWW affiliate, however, Local 8 worked to become a progressive, interracial union. For much of its time, the union majority was African American, always with a cadre of black leaders, which included Ben Fletcher. Local 8 also claimed immigrants from Eastern Europe, as well as many Irish Americans, who had a notorious reputation for racism.

In Wobblies on the Waterfront, Peter Cole outlines the factors that were instrumental in Local 8's success, both ideological (the IWW's commitment to working-class solidarity) and pragmatic (racial divisions helped solidify employer dominance). He also shows how race was central not only to the rise but also to the decline of Local 8, as increasing racial tensions were manipulated by employers and federal agents bent on the union's destruction.

Peter Cole is a professor of history at Western Illinois University.

"Cole's richly detailed book provides a glimpse at a topic too often ignored, the local IWW. . . . Wobblies on the Waterfront deserves to be read seriously by labor historians and historians interested in race and social justice movements. . . . This remarkable book provides a sense of what the Wobblies might have become if given a chance."--Journal of American History

"One of the best and most important histories of the Industrial Workers of the World."--American Historical Review

"Cole skillfully integrates material from IWW leaders, government documents, newspaper accounts, and oral histories with secondary literature to produce a superb case study, one that should appeal to anyone interested in the IWW, the intersection of work and race, waterfront work, or race relations in the United States during the World War I period."--H-Urban

"An invaluable resource to those interested broadly in the historiography of race and industrial unionism and more specifically in Local 8 itself. . . . A worthwhile contribution to the literature and an inspiration to those of us who hold out hope for a unified labor movement."--Labor History

"Cole's book amply demonstrates the value of interracial solidarity to successful organizing and shows that is was possible even under relatively inhospitable conditions. Wobblies on the Waterfront is a valuable addition to the debate about the intersections of race and class in labor history and will be of interest to scholars and advanced students of labor history."--Labor Studies Journal

"The story of Philadelphia's Local 8, a motley and international crew of longshoremen who worked together against the rising tide of racial intolerance [is] one worth telling and one well told in Peter Cole's Wobblies on the Waterfront."--Labour/Le Travail

"This book is a powerful reminder of what a militant and democratic union can accomplish, but also serves as a warning that only a far more powerful labor movement than we have at present can avoid the kind of tragedy depicted here." --Solidarity

"Cole’s magnificent monograph, Wobblies on the Waterfront: Interracial Unionism in Progressive-Era Philadelphia, placed Fletcher squarely at the center of (dock)worker organizing in the early twentieth century. That meant reckoning with the dynamics of race and class, not to mention the potentialities and limits of direct-action vs. bread-and-butter unionism in an interracial but predominantly black labor union. Fleshing out Fletcher, as Cole did, unsettled not only U.S. labor history but also histories of American radicalism and Black Studies." --Dissent

"By demonstrating how interracial solidarity prevailed on the Philadelphia waterfront for the better part of a momentous and critically important decade, Peter Cole kindles the flames of the 'class-race' debate. As he also demonstrates, Local 8's achievements in this regard were all the more remarkable because the larger context--in Philadelphia and in the nation--was one of racial polarization and virulent white racism."--Bruce Nelson, author of Divided We Stand: American Workers and the Struggle for Black Equality

"Wobblies on the Waterfront offers a fascinating and engaging look at the Philadelphia longshoremen in Local 8 of the IWW. Offering a fresh perspective on an important organization that charted its own, independent course in the 1910s and '20s, this study considerably adds to our knowledge of waterfront unionism, Philadelphia labor, the IWW, and race and labor. Local 8 deserves the in-depth treatment that Peter Cole gives it, for it stood out as a rather unique example of militant, interracial unionism in an age in which exclusion or segregation was the rule in the labor movement."--Eric Arnesen, editor of The Black Worker: Race, Labor, and Civil Rights since Emancipation

Listen to an interview with Peter Cole on Revolutionary Left Radio