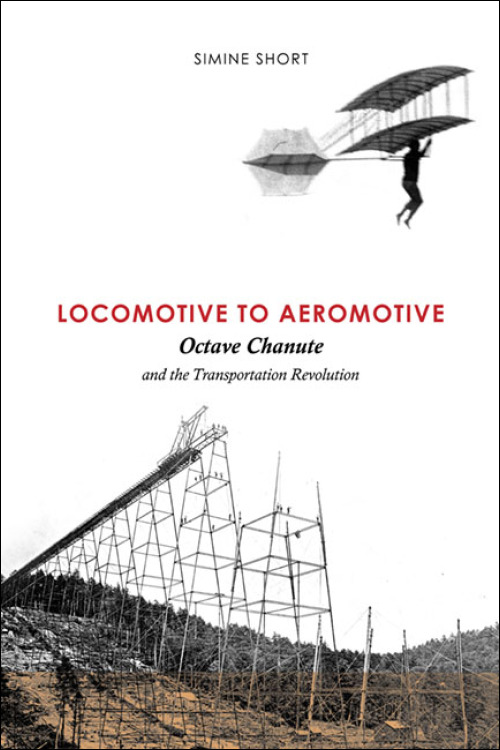 French-born and self-trained civil engineer Octave Chanute designed America's two largest stockyards, created innovative and influential structures such as the Kansas City Bridge over the previously "unbridgeable" Missouri River, and was a passionate aviation pioneer whose collaborative approach to aeronautical engineering problems encouraged other experimenters, including the Wright brothers. Drawing on rich archival material and exclusive family sources, Locomotive to Aeromotive is the first detailed examination of Chanute's life and his immeasurable contributions to engineering and transportation, from the ground transportation revolution of the mid-nineteenth century to the early days of aviation.

Aviation researcher and historian Simine Short brings to light in colorful detail many previously overlooked facets of Chanute's professional and personal life. In the late nineteenth century, few considered engineering as a profession on par with law or medicine, but Chanute devoted much time and energy to the newly established professional societies that were created to set standards and serve the needs of civil engineers. Though best known for his aviation work, he became a key figure in the opening of the American continent by laying railroad tracks and building bridges, experiences that later gave him the engineering knowledge to build the first stable aircraft structure. Chanute also introduced a procedure to treat wooden railroad ties with an antiseptic that increased the wood’s lifespan in the tracks. Establishing the first commercial plants, he convinced railroad men that it was commercially feasible to make money by spending money on treating ties to conserve natural resources. He next introduced the date nail to help track the age and longevity of railroad ties.

A versatile engineer, Chanute was known as a kind and generous colleague during his career. Using correspondence and other materials not previously available to scholars and biographers, Short covers Chanute's formative years in antebellum America as well as his experiences traveling from New Orleans to New York, his apprenticeship on the Hudson River Railroad, and his early engineering successes. His multiple contributions to railway expansion, bridge building, and wood preservation established his reputation as one of the nation's most successful and distinguished civil engineers. Instead of retiring, he utilized his experiences and knowledge as a bridge builder in the development of motorless flight. Through the reflections of other engineers, scientists, and pioneers in various fields who knew him, Short characterizes Chanute as a man who believed in fostering and supporting people who were willing to learn. This well-researched biography cements Chanute's place as a preeminent engineer and mentor in the history of transportation in the United States and the development of the airplane.

Simine Short is an aviation historian who has researched and written extensively on the history of motorless flight. Her first book, Glider Mail: An Aerophilatelic Handbook, received numerous research awards worldwide and is considered a standard reference by aerophilatelists and aviation researchers. She lives with her husband outside Chicago, Illinois.

"A fascinating, detailed, and intimate portrait of an engineering giant."--Civil Engineering

"An important biography of an extraordinary man. Highly recommended."--Choice

"An amazing trip back in time – to the time of steam ships and steam locomotives."--Soaring

"Simine Short has brought a worthy addition to the corpus of aviation literature continuing to come from the United States."--The Aerospace Professional

"Simine Short has written the first full biography of Chanute, and has done a remarkable job."--Technology and Culture

With this book, Simine Short has done us all a great service. Locomotive to Aeromotive is a well written, serious work with an attention to detail that will appeal to historians."--Technical Soaring

"An impressive, truly significant addition to the field of engineering and aeronautical history. Simine Short shows how Octave Chanute's personality and method of problem-solving enabled him to make meaningful contributions in diverse fields such as railroad and bridge engineering, stockyard design, and the early phase of aviation."--Robert W. Jackson, licensed glider pilot and author of Rails across the Mississippi: A History of the St. Louis Bridge

"As the first detailed biography of civil engineer and aeronautic pioneer Octave Chanute, this book fills a gap in the existing literature and is suitable for both the lay reader and the expert."--Anthony M. Springer, editor of Aerospace Design: Aircraft, Spacecraft, and the Art of Modern Flight

"We have waited a long time for a solid biography of Octave Chanute. Simine Short has given us a book worth waiting for. She succeeds in situating the details of Chanute’s long life and extraordinary career squarely in the context of his time."--from the foreword by Tom D. Crouch, senior curator of aeronautics, National Air and Space Museum, Smithsonian Institution