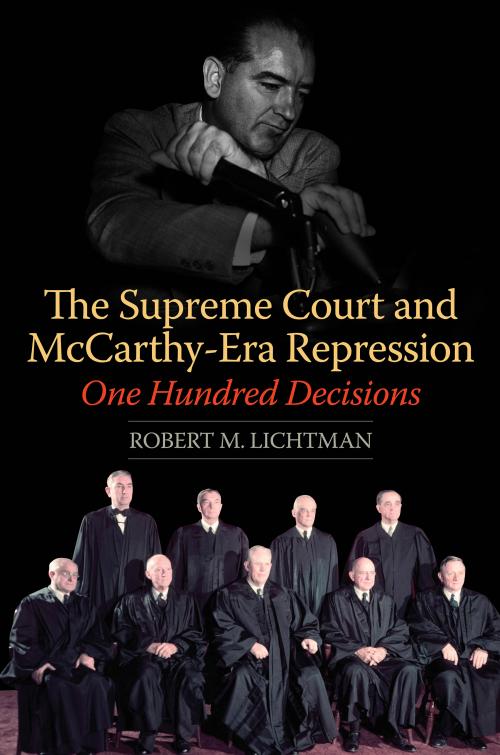 In this volume, attorney Robert M. Lichtman provides a comprehensive history of the U.S. Supreme Court's decisions in "Communist" cases during the McCarthy era. Lichtman shows the Court's vulnerability to public criticism and attacks by the elected branches during periods of political repression. The book describes every Communist-related decision of the era (none is omitted), placing them in the context of political events and revealing the range and intrusiveness of McCarthy-era repression.

In Fred Vinson's term as chief justice (1946–53), the Court largely rubber-stamped government action against accused Communists and "subversives." After Earl Warren replaced Vinson as chief justice in 1953, however, the Court began to rule against the government in "Communist" cases, choosing the narrowest of grounds but nonetheless outraging public opinion and provoking fierce attacks from the press and Congress. Legislation to curb the Court flooded Congress and seemed certain to be enacted. The Court's situation was aggravated by its 1954 school-desegregation decision, Brown v. Board of Education, which led to an anti-Court alliance between southern Democrats and anti-Communists in both parties. Although Lyndon Johnson's remarkable talents as Senate majority leader saved the Court from highly punitive legislation, the attacks caused the Court to retreat, with Felix Frankfurter leading a five-justice majority that decided major constitutional issues for the government and effectively nullified earlier decisions. Only after August 1962, when Frankfurter retired and was replaced by Arthur Goldberg, did the Court again begin to vindicate individual rights in "Communist" cases--its McCarthy era was over.

Demonstrating keen insight into the Supreme Court's inner workings and making extensive use of the justices' papers, Lichtman examines the dynamics of the Court's changes in direction and the relationships and rivalries among its justices, including such towering figures as Hugo Black, Felix Frankfurter, Earl Warren, William O. Douglas, and William J. Brennan, Jr. The Supreme Court and McCarthy-Era Repression: One Hundred Decisions tells the entire story of the Supreme Court during this unfortunate period of twentieth-century American history.

Robert M. Lichtman, a Washington, D.C., lawyer for nearly thirty years, has practiced in San Francisco since 1986. He is coauthor of Deadly Farce: Harvey Matusow and the Informer System in the McCarthy Era.

"In its vivid portrayal of the Court's attempts to balance liberty and order under severe pressures, The Supreme Court and McCarthy-Era Repression tells the story of a Court in turmoil that still managed to lay the foundation for the protection of civil rights."--Harvard Law Review

"A comprehensive reference work on the Court, with an excellent bibliography and abundant endnotes. . . . invaluable."--History News Network

"A thoroughly researched, easily readable, and highly useful overview of the US Supreme Court's handling of Communist-related cases during the years 1948-1967."--The Historian

"A concise yet comprehensive. . . .tool for historians seeking to understand the flow of anticommunist jurisprudence over more than a decade."--Journal of American History

"The Supreme Court and McCarthy-Era Repression provides a valuable research guide to the Supreme Court's encounter with the anti-communism of the 1950s."--American Communist History

"A masterful piece of painstaking legal research and measured analysis. Lichtman demonstrates dramatically the vulnerability of our most revered national institutions in the face of strong political and popular pressures, while at the same time revealing an impressive array of legal maneuvers judges can use to stave off permanent wounds to our constitutional heritage."--Patricia M. Wald, former Chief Judge, U.S. Court of Appeals, D.C. Circuit (ret.)

"In describing every Communist decision by the Supreme Court during the McCarthy era, Robert M. Lichtman illuminates the incredible breadth of the anti-communist programs and the injuries they inflicted on the individuals affected and the nation as a whole."--Lucas A. Powe Jr., author of The Warren Court and American Politics

"An overwhelmingly detailed, well-documented analysis of the reactions, attitudes, and decisions of the various Supreme Court justices in McCarthy-era cases. The many interesting historical, political, and biographical vignettes will attract readers interested in legal history, political science, and communications."--Daniel J. Leab, editor of American Communist History and author of Orwell Subverted: The CIA and the Filming of Animal Farm

"Lichtman's book is a carefully researched and well-crafted snapshot of a particularly important period in the development of constitutional law. His masterly knitting together of historical background, sharp portraits of the Justices, and concise yet incisive accounts of the cases will be invaluable for students of this key moment in the Court's history."--Aziz Z. Huq, coauthor of Unchecked and Unbalanced: Presidential Power in a Time of Terror