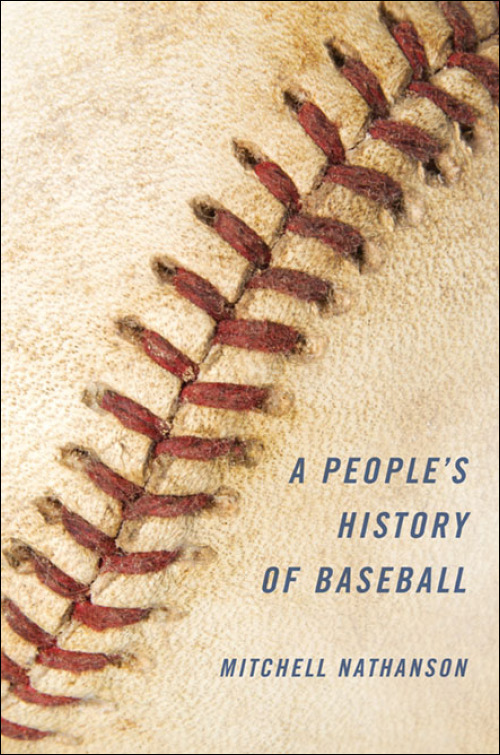 Baseball is much more than the national pastime. It has become an emblem of America itself. From its initial popularity in the mid-nineteenth century, the game has reflected national values and beliefs and promoted what it means to be an American. Stories abound that illustrate baseball's significance in eradicating racial barriers, bringing neighborhoods together, building civic pride, and creating on the field of play an instructive civics lesson for immigrants on the national character.

In A People's History of Baseball, Mitchell Nathanson probes the less well-known but no less meaningful other side of baseball: episodes not involving equality, patriotism, heroism, and virtuous capitalism, but power--how it is obtained, and how it perpetuates itself. Through the growth and development of baseball Nathanson shows that, if only we choose to look for it, we can see the petty power struggles as well as the large and consequential ones that have likewise defined our nation.

By offering a fresh perspective on the firmly embedded tales of baseball as America, a new and unexpected story emerges of both the game and what it represents. Exploring the founding of the National League, Nathanson focuses on the newer Americans who sought club ownership to promote their own social status in the increasingly closed caste of nineteenth-century America. His perspective on the rise and public rebuke of the Players Association shows that these baseball events reflect both the collective spirit of working and middle-class America in the mid-twentieth century as well as the countervailing forces that sought to beat back this emerging movement that threatened the status quo. And his take on baseball’s racial integration that began with Branch Rickey’s “Great Experiment” reveals the debilitating effects of the harsh double standard that resulted, requiring a black player to have unimpeachable character merely to take the field in a Major League game, a standard no white player was required to meet.

Told with passion and occasional outrage, A People's History of Baseball challenges the perspective of the well-known, deeply entrenched, hyper-patriotic stories of baseball and offers an incisive alternative history of America's much-loved national pastime.

Mitchell Nathanson is a professor of legal writing at Villanova University School of Law and the author of The Fall of the 1977 Phillies: How a Baseball Team's Collapse Sank a City's Spirit.

"Chronicles the historic power struggles among those seeking to define and regulate pro baseball. . . . A fine book."--Library Journal

"A People’s History of Baseball provides vigorous and fascinating challenges to the ways in which fans have related to a game that [Nathanson] says has been ‘virtually synonymous’ with America for well over a century.”--The Boston Globe

"Nathanson has researched thoroughly, writes persuasively, and does not shy away from challenging even the most revered narrative in baseball: Branch Rickey, Jackie Robinson, and the integration of Major League Baseball."--Journal of Sport History

"A valuable and vibrant contribution to an expanding scholarly literature on American baseball."--The Historian

"Mitchell Nathanson's A People's History of Baseball is a historical corrective. It examines Major League Baseball (MLB) through an "alternative lens" (219), one that provides a useful, critical perspective. The book's six chapters cover a lot of ground. A thoughtful, substantive exploration of some aspects of MLB's unsavory past and present, A People's History of Baseball is a welcome alternative to the far more numerous baseball romances published every spring."--Nine

"An excellent social critique that tells provocative and overlooked back stories about baseball in American history and culture. A People's History of Baseball goes beyond the game itself and examines larger issues of nationalism, mass media, legal history, and race relations."--Robert Elias, author of The Empire Strikes Out: How Baseball Sold U.S. Foreign Policy and Promoted the American Way Abroad

"Armed with convincing and creative arguments that challenge the many myths surrounding America's national pastime, A People's History of Baseball provides ample fodder for debate among sport history scholars as well as general readers interested in exploring the game's meaningful role in shaping the American identity."--Samuel O. Regalado, author of Viva Baseball! Latin Major Leaguers and Their Special Hunger