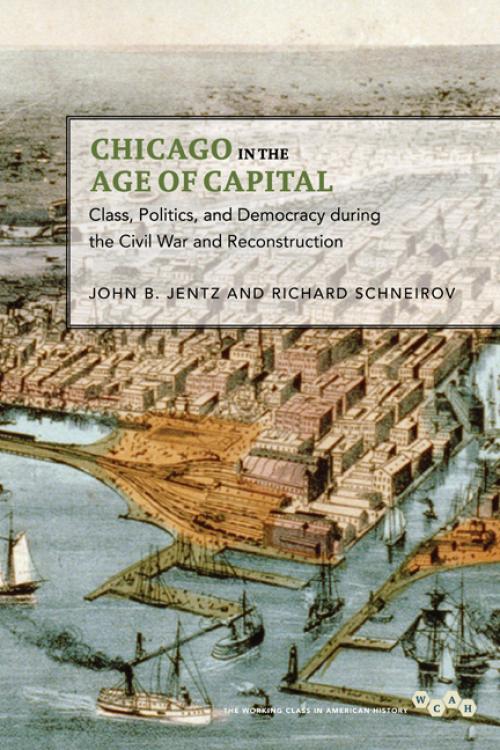 Chicago in the Age of Capital

In this sweeping interpretive history of mid-nineteenth-century Chicago, historians John B. Jentz and Richard Schneirov boldly trace the evolution of a modern social order. Combining a mastery of historical and political detail with a sophisticated theoretical frame, Jentz and Schneirov examine the dramatic capitalist transition in Chicago during the critical decades from the 1850s through the 1870s, a period that saw the rise of a permanent wage worker class and the formation of an industrial upper class.

Jentz and Schneirov demonstrate how a new political economy, based on wage labor and capital accumulation in manufacturing, superseded an older mercantile economy that relied on speculative trading and artisan production. The city's leading business interests were unable to stabilize their new system without the participation of the new working class, a German and Irish ethnic mix that included radical ideas transplanted from Europe. Jentz and Schneirov examine how debates over slave labor were transformed into debates over free labor as the city's wage-earning working class developed a distinctive culture and politics.

The new social movements that arose in this era--labor, socialism, urban populism, businessmen's municipal reform, Protestant revivalism, and women's activism--constituted the substance of a new post-bellum democratic politics that took shape in the 1860s and '70s. When the Depression of 1873 brought increased crime and financial panic, Chicago's new upper class developed municipal reform in an attempt to reassert its leadership. Setting local detail against a national canvas of partisan ideology and the seismic structural shifts of Reconstruction, Chicago in the Age of Capital vividly depicts the upheavals integral to building capitalism.

John B. Jentz is a research and instructional services librarian at Marquette University and coeditor of German Workers in Chicago : A Documentary History of Working-Class Culture from 1850 to World War I. Richard Schneirov is a professor of history at Indiana State University and the author of Labor and Urban Politics: Class Conflict and the Origins of Modern Liberalism in Chicago, 1864–97.

"This first-rate study of an important city offers a careful, nuanced take on the relationship between modern capitalism and democracy."--The Journal of American History

"A masterful case for the power of intensive local studies."--Journal of Illinois History

"An indispensable study for anyone interested in the labor history of Chicago in the nineteenth century. . . . this book also provides a useful context to some of the most dramatic events in that history."--American Historical Review

"A tour-de-force example of local narrative used to illuminate historical theory."--Journal of the Gilded Age and Progressive Era

"Scholars seeking to understand the intricacies of Chicago's political history in the era of the Civil War and Reconstruction should start here. Those with broader interests in the relationship between capitalism and democracy in the late nineteenth century will find in this book a provocative alternative to the dominant historiographical perspective."--Reviews in American History

"Chicago in the Age of Capital will be useful to other historians for its extensive use of newspaper records and its solid grounding in the quantitative analysis of population and manufacturing trends. Its blend of social, political, and intellectual history contextualizes and deepens our understanding of the relationship between capital, labor and politics."--The Historian

"A well-written and much-needed labor history of Chicago during Civil War and Reconstruction. Labor historians of the Civil War era and/or nineteenth-century America will welcome this book into the historical conversation."--H-Net Reviews / H-War

"Chicago in the Age of Capital is a welcome addition to our understanding of the emerging and early working class politics of the nineteenth century. Jentz and Schneirov have rightfully pushed us to continue thinking about Chicago and the Midwest within a larger national story--one that has previously been limited to southern regionalism--as boosterism, capitalism, ethnicity, and labor all formed a complex web of power and politics."--Middle West Review

"Chicago in the Age of Capital is an unmatched scholarly investigation of the emergence of the political economy of the Gilded Age by two masters of Chicago's labor history."--Labour

"This is a superbly researched, well-conceived, and boldly argued interpretation of the rise of a permanent working class, the formation of an industrial bourgeoisie, and the relations between these social classes in Chicago from the antebellum years through the 1870s. Anyone who continues to question the salience of class analysis for understanding nineteenth-century social history, and, of course, those who are already convinced of this approach, will want to read this study."--James R. Barrett, author of William Z. Foster and the Tragedy of American Radicalism