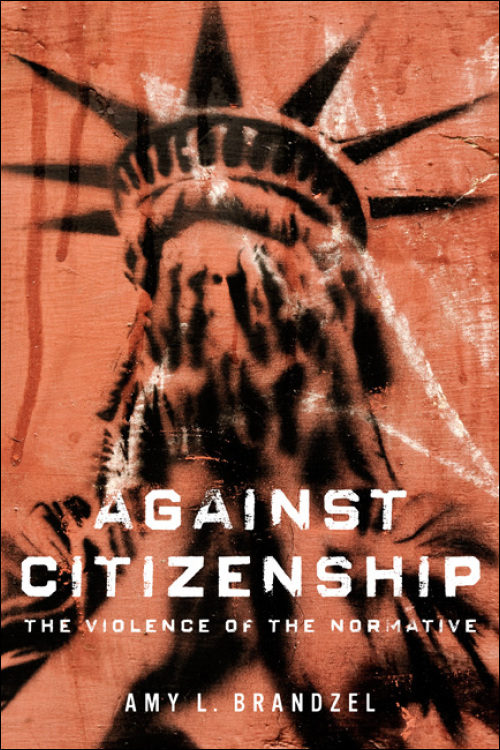 Numerous activists and scholars have appealed for rights, inclusion, and justice in the name of "citizenship." Against Citizenship provocatively shows that there is nothing redeemable about citizenship, nothing worth salvaging or sustaining in the name of "community," practice, or belonging. According to Brandzel, citizenship is a violent dehumanizing mechanism that makes the comparative devaluing of human lives seem commonsensical, logical, and even necessary. Against Citizenship argues that whenever we work on behalf of citizenship, whenever we work toward including more types of peoples under its reign, we inevitably reify the violence of citizenship against nonnormative others.

Against Citizenship is an impassioned plea for a queer, decolonial, anti-racist coalitional stance against the systemized human de/valuing and anti-intersectionalities of citizenship.

Amy L. Brandzel is an assistant professor of American studies and women studies at the University of New Mexico.

"This thoughtful, energizing, and inspiring work should be commended for scholars and activists alike who are engaged in sociopolitical critique."--H-Net Reviews

"Against Citizenship will be regarded as one of the most important books in queer and feminist theory of its generation. Broad in its intellectual scope, Brandzel's deft skill at bridging feminist and queer studies with critical ethnic studies and critical Indigenous studies offers a model for the kind of intersectional analysis required to understand and challenge the violence of normativities. It is a powerful read."--Karma Chávez, author of Queer Migration Politics: Activist Rhetoric and Coalitional Possibilities

"Amy Brandzel reaches broadly across and deeply into queer, feminist, indigenous and critical race studies to expose the irredeemable violences of U.S. citizenship. By bringing together case studies rarely considered within the same frame, Brandzel enacts the kind of intersectional alliance-building towards which Brandzel urges readers. This book energized me, and I look forward to using Brandzel's ideas as a springboard for building coalitions that reject faith in citizenship and instead create other kinds of affinities and attachments."--Noelani Goodyear-Ka’opua, coeditor of A Nation Rising: Hawaiian Movements for Life, Land, and Sovereignty

"This provocative book is a must-read for scholars and activists engaged in political critique and projects that are invested in challenging the limits of inclusion lodged within the normative frameworks of U.S. law. Brandzel skillfully documents the violence of anti-intersectional politics, epistemologies, and citizenship practices within cases of hate crime legislation, same-sex marriage, and the tensions between civil rights and indigenous rights to effectively argue that the politics of alliance requires activisms against US citizenship as it is constructed through a process of human devaluing. As an ethical alternative, the author offers a dynamic methodology for engaging in a politics of responsibility and accountability for those committed to queer studies and liberatory coalition building."--J. K?haulani Kauanui, Hawaiian Blood: Colonialism and the Politics of Sovereignty and Indigeneity