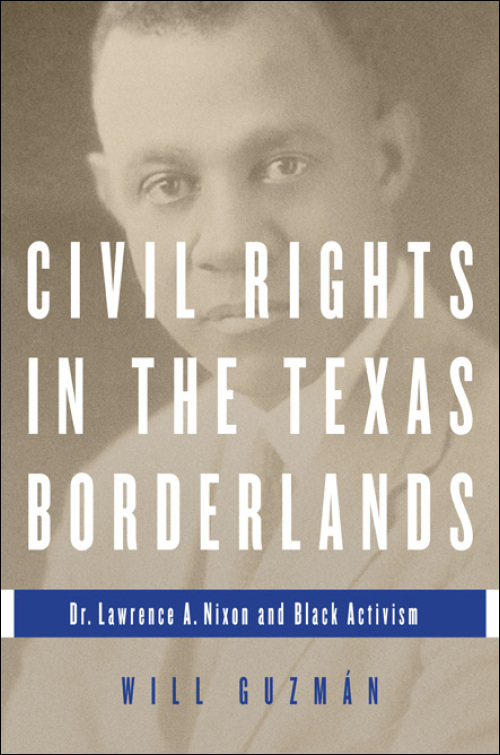 Physician Lawrence A. Nixon fled the racial violence of central Texas to settle in the border town of El Paso. There he became a community and civil rights leader, working on integration and antilynching cases and cofounding the local NAACP chapter. In 1923, Nixon challenged the law that banned African Americans from voting in the Democratic primary. His victory in two subsequent Supreme Court decisions paved the way for dismantling all-white primaries across the South.

Will Guzmán delves into Nixon's lifelong, and mostly unknown, struggle against Jim Crow. Linking Nixon's successful activism to his independence from the white economy, support from the NAACP, and indefatigable courage, Guzmán places Nixon within the context of the larger historical narratives of his era. At the same time, he sheds light on Nixon's presence in both symbolic and literal borderlands--as an educated professional in a time when few went to college, as someone who made waves when most feared violent reprisal, and as an African American living on the mythical American frontier as well as an international boundary.

Enlightening and powerful, Civil Rights in the Texas Borderlands adds to the growing literature on African Americans in the Southwest while exploring a seldom-studied corner of the Black past and the civil rights movement.

Will Guzmán is a professor of history at Prairie View A&M University. He is a coauthor of Landmarks and Legacies: A Guide to Tallahassee's African American Heritage.

"An ambitious and courageous professional and activist, Nixon's life and works rightfully deserve scholarly attention. With his exploration of archival and oral history sources, Will Guzmán has undertaken an important subject."--Southern Spaces

"Guzmán's engaging and accessible writing style really brings this story to life, making it a perfect fit for undergraduate and graduate students as well as general audiences. --Civil Rights in the Texas Borderlands is a must read for anyone interested in Texas history, African American history, and the Southwest borderlands." --Western Historical Quarterly

"This worthwhile study contributes to borderlands history and the literature on black physicians in the civil rights movement, and it shifts the Jim Crow terrain to the American Southwest."--Journal of Southern History

"Will Guzmán has written an excellent, thorough life story of one of the twentieth century's most influential civil rights activists."--Southwestern Historical Quarterly

"Will Guzmán's gracefully written biography of Dr. Lawrence A. Nixon is a valuable addition to studies of the borderlands and the political and civil rights struggles of residents in underserved communities. Guzmán adroitly opens a window onto the relations between African Americans, Mexican Americans, and Anglos while illuminating the challenges and barriers Dr. Nixon confronted as he labored to keep bodies well and hope alive."--Darlene Clark Hine, author of Black Victory: The Rise and Fall of the Texas White Primary

"Will Guzmán restores Lawrence A. Nixon to his proper place as one of the borderland's leading African American physicians and a pioneering opponent of Jim Crow."--Karl Jacoby, author of Shadows at Dawn: An Apache Massacre and the Violence of History

"More than a biography, Will Guzmán's book offers a fresh window onto the U.S.-Mexico borderlands. Guzmán skillfully brings together African American history, western history, Chicana/o history, and the history of medicine into a fascinating and lively account of civil rights pioneer Lawrence Nixon."--Pablo Mitchell, author of Coyote Nation: Sexuality, Race, and Conquest in Modernizing New Mexico, 1880–1920

"This well-researched book makes a major contribution to multiple fields including Black studies, Chicano studies, the civil rights movement, and the history of medicine."--Gerald Horne, author of Black and Brown: African Americans and the Mexican Revolution, 1910–1920