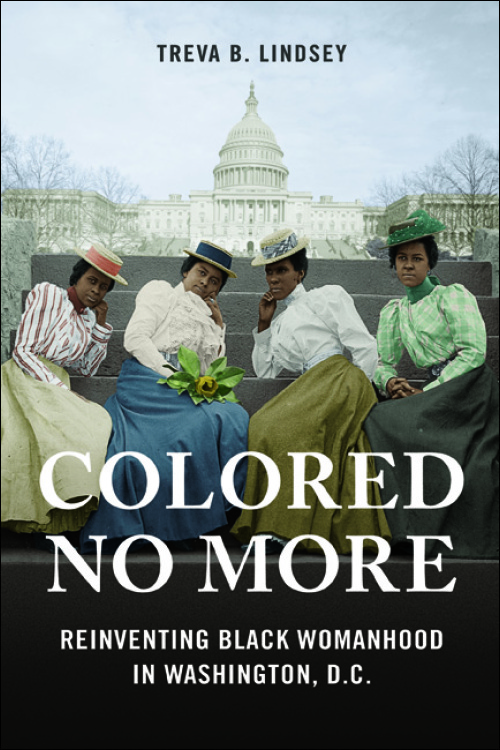 Home to established African American institutions and communities, Washington, D.C., offered women in the New Negro movement a unique setting for the fight against racial and gender oppression. Colored No More traces how African American women of the late-nineteenth and early twentieth century made significant strides toward making the nation's capital a more equal and dynamic urban center.

Treva B. Lindsey is an associate professor of women's, gender, and sexuality studies at The Ohio State University.

"Lindsey’s brilliantly researched book adds to black culture by mapping out the intersections of various identities of African-American women who shaped black life on a local and national scale."--Vibe

"Lindsay successfully demonstrates that New Negro womanhood was a complex and capacious category accommodating a range of social, political, and sexual beliefs. . . . Colored No More is essential to the historiography of Washington, D.C."--Washington History

"Colored No More provokes important questions for African American historiography and should inform historians' telling of urban black history after the Civil War. . . . Lindsey is precise and explicit in her interpretation of sources but seems also to recognize the present-day consequences of that interpretation."--H-Net Review [H-SHGAPE]

"Lindsey's book is an ambitious and creative undertaking of documenting African American women's activism in the nation's capital." --Journal of American Ethnic History

"Treva Lindsey, in Colored No More, is as bold as the women about whom she writes. Fresh research, illuminated by feminist theory, reveals how 'New Negro Womanhood' became a framework through which African American women developed modern identities. The politics of respectability confront the politics of pleasure in this outstanding study."--Martha S. Jones, author of All Bound Up Together: The Woman Question in African American Public Culture, 1830-1900

"An insightful book theoretically framed around ideas of 'Colored' and New Negro Womanhood. Lindsey demonstrates how Black women in Washington, D.C., labored and managed under the strains of Jim and Jane Crow, navigating structural disadvantages and persistent sexist exclusion in the nation's capital. Lindsey makes abundantly clear that the diverse efforts of Black Washingtonian women, from political organizing to cultural productions, pushed the boundaries of culturally accepted norms and laid a foundation for latter liberationist movements led by Black women within their communities both locally and nationally."--Randal Maurice Jelks, author of Benjamin Elijah Mays, Schoolmaster of the Movement: A Biography

"A timely and important book that centers black women in the New Negro era--a long overdue addition to the history and historiography."--Danielle L. McGuire, author of At the Dark End of the Street: Black Women, Rape, and Resistance--A New History of the Civil Rights Movement from Rosa Parks to the Rise of Black Power