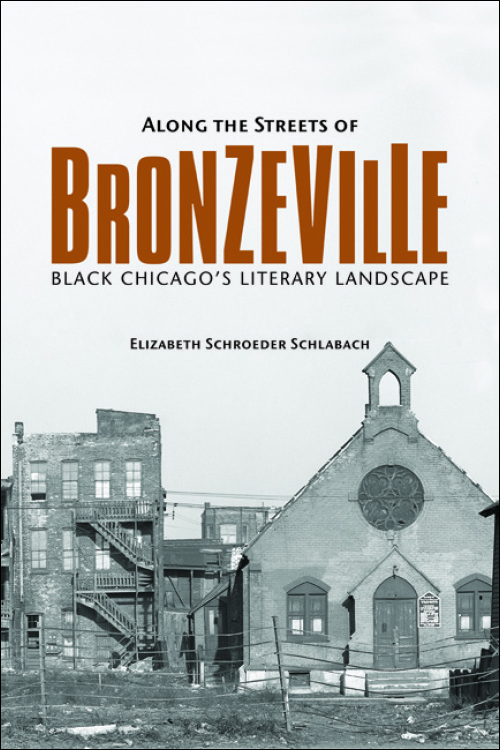 Along the Streets of Bronzeville examines the flowering of African American creativity, activism, and scholarship in the South Side Chicago district known as Bronzeville during the period between the Harlem Renaissance in the 1920s and the Black Arts Movement of the 1960s. Poverty stricken, segregated, and bursting at the seams with migrants, Bronzeville was the community that provided inspiration, training, and work for an entire generation of diversely talented African American authors and artists who came of age during the years between the two world wars.

In this significant recovery project, Elizabeth Schroeder Schlabach investigates the institutions and streetscapes of Black Chicago that fueled an entire literary and artistic movement. She argues that African American authors and artists--such as Gwendolyn Brooks, Richard Wright, Langston Hughes, painter Archibald Motley, and many others--viewed and presented black reality from a specific geographic vantage point: the view along the streets of Bronzeville. Schlabach explores how the particular rhythms and scenes of daily life in Bronzeville locations, such as the State Street "Stroll" district or the bustling intersection of 47th Street and South Parkway, figured into the creative works and experiences of the artists and writers of the Black Chicago Renaissance. She also covers in detail the South Side Community Art Center and the South Side Writers' Group, two institutions of art and literature that engendered a unique aesthetic consciousness and political ideology for which the Black Chicago Renaissance would garner much fame.

Life in Bronzeville also involved economic hardship and social injustice, themes that resonated throughout the flourishing arts scene. Schlabach explores Bronzeville's harsh living conditions, exemplified in the cramped one-bedroom kitchenette apartments that housed many of the migrants drawn to the city's promises of opportunity and freedom. Many struggled with the precariousness of urban life, and Schlabach shows how the once vibrant neighborhood eventually succumbed to the pressures of segregation and economic disparity. Providing a virtual tour South Side African American urban life at street level, Along the Streets of Bronzeville charts the complex interplay and intersection of race, geography, and cultural criticism during the Black Chicago Renaissance's rise and fall.

Elizabeth Schroeder Schlabach is an associate professor of history and African and African American studies at Earlham College.

"Along the Streets of Bronzeville is a compelling and comprehensive history of Chicago's Black Renaissance. Along with her solid research and masterful prose, Schlabach shares many illustrations and archival documents to give life to this vibrant history of Bronzeville. All scholars interested in the history of Black Chicago, African American cultural history, and literary history at large should read this book."--History: Reviews of New Books

"An insightful study of Chicago's streets, kitchenettes, numbers games, black counterpolitical culture, and artistic and literary figures of the mid-twentieth century. . . . Along the Streets of Bronzeville accomplishes its primary project of extending our understanding of the rich complexity made possible by racial segregation and black cultural ingenuity in the face of white supremacy. Schlabach convincingly encourages renewed attention to black materiality, and aesthetics."--Journal of American History

"A thought-provoking, informative, and unique study. Schlabach offers her own fascinating take on the development of the Black Chicago Renaissance, its creative artists, and most impressively the geographies of the Black Belt as it evolved into Bronzeville and the new black public spaces created by successive waves of black migrants in the first half of the twentieth century."--Robert B. Stepto, author of From Behind the Veil: A Study of Afro-American Narrative