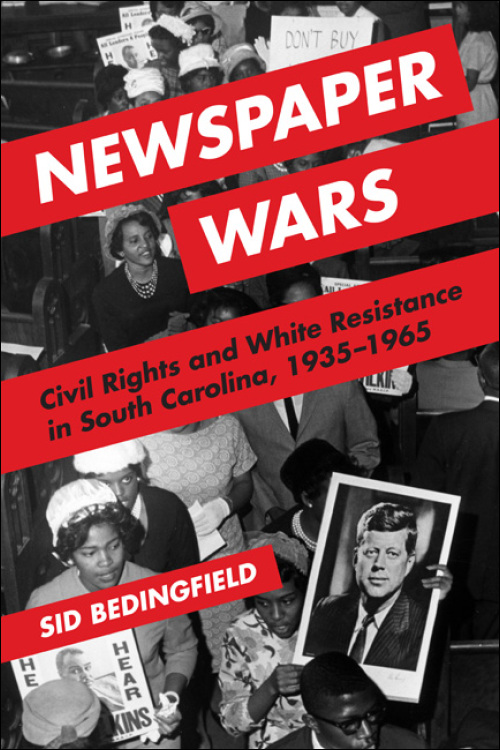 Against all odds, the seeds of social change found purchase in mid-twentieth century South Carolina. Newspaperman John McCray and his allies at the Lighthouse and Informer challenged readers to "rebel and fight"--to reject the "slavery of thought and action" and become "progressive fighters" for equality.

Newspaper Wars traces the role journalism played in the fight for civil rights in South Carolina from the 1930s through the 1960s. Moving the press to the center of the political action, Sid Bedingfield tells the stories of the long-overlooked men and women on the front lines of a revolution. African American progress sparked a battle to shape South Carolina's civic life, with civil rights activists arrayed against white journalists determined to preserve segregation through massive resistance. As that strategy failed, white newspapers turned to overt political action and crafted the still-prevalent narratives that aligned southern whites with the national conservative movement.

Sid Bedingfield is an assistant professor of journalism and mass communication at the University of Minnesota.

"This well-written, deeply contextualized book is as much a political history of South Carolina as it is an examination of race and journalism. . . . A commendable study that advances knowledge of the southern press in the civil rights era."--American Journalism

"Newspaper Wars is a strong, important study of black journalism, state-level organizing, and the role that journalists play in shaping the assumptions of the public sphere, assumptions that conditioned the discussions that created civil rights success in South Carolina." --The Journal of American History

"Newspaper Wars: Civil Rights and White Resistance in South Carolina, 1935-1965 not only remedies a lack of scholarship on the press in South Carolina but also shows how newspapers shaped the course of social and political change." --The Journal of Southern History

"This work is a valuable contribution that expresses how the minute can explain the whole and civil rights began as a grassroots movement, propagated by the influence of African American newspapers, and expanded in several places concomitantly as African Americans began to reclaim the rights that had been denied to them for so long." --Journal of African American History

"Very well written and enjoyable to read. Journalists, Sid Bedingfield persuasively demonstrates, did not just document the civil rights movement in South Carolina, but rather they actively influenced its course and outcomes."--Michael Stamm, author of Sound Business: Newspapers, Radio, and the Politics of New Media