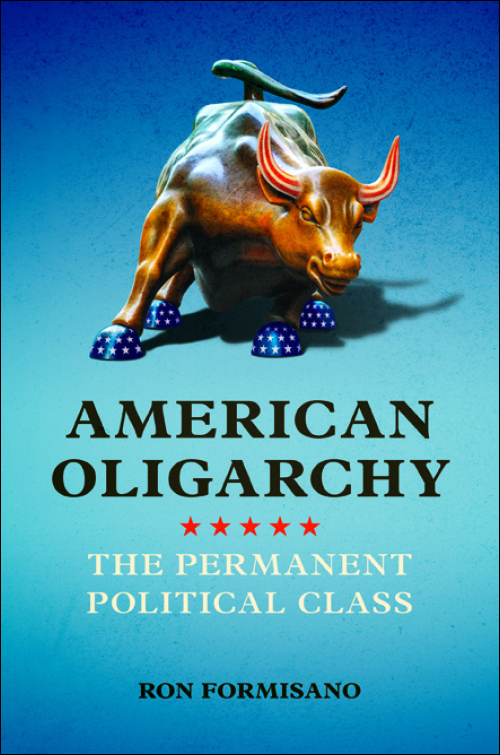 A permanent political class has emerged on a scale unprecedented in our nation’s history. Its self-dealing, nepotism, and corruption contribute to rising inequality. Its reach extends from the governing elite throughout nongovernmental institutions. Aside from constituting an oligarchy of prestige and power, it enables the creation of an aristocracy of massive inherited wealth that is accumulating immense political power.

In a muckraking tour de force reminiscent of Lincoln Steffens, Upton Sinclair, and C. Wright Mills, American Oligarchy demonstrates the way the corrupt culture of the permanent political class extends down to the state and local level. Ron Formisano breaks down the ways this class creates economic inequality and how its own endemic corruption infects our entire society. Formisano delves into the work of not just politicians but lobbyists, consultants, appointed bureaucrats, pollsters, celebrity journalists, behind-the-scenes billionaires, and others. Their shameless pursuit of wealth and self-aggrandizement, often at taxpayer expense, rewards channeling the flow of income and wealth to elites. That inequality in turn has choked off social mobility and made a joke of meritocracy. As Formisano shows, these forces respond to the oligarchy’s power and compete to bask in the presence of the .01 percent. They also exacerbate the dangerous instability of an American democracy divided between extreme wealth and extreme poverty.

Ron Formisano is the William T. Bryan Chair of American History and professor emeritus of history at the University of Kentucky. His books include Plutocracy in America: How Increasing Inequality Destroys the Middle Class and Exploits the Poor, The Tea Party: A Brief History, and For the People: American Populist Movements from the Revolution to the 1850s.

"This book is a sobering look at just how awry our political system has gone. . . . Recommended."--Choice

"The book is painstaking and thorough in tracing the paths through which some individuals use their money and political power to accumulate more of the same." --Political Science Quarterly

"American Oligarchy is a terrific, honest, bracing, book. It reminds me of the great muckraking journalists of the last century, telling a portrait of power through gripping individual stories. Formisano, in chapter after chapter, pulls back the curtain on how elites in America really operate. It is a story of class, of self-delusion, and of greed masked with public service."--Zephyr Teachout

“A desperately needed contribution to political education for those citizens and political pundits seeking to gain a better understanding of the impact of the latest massive shift in economic and political power and struggling to overcome the antidemocratic consequences of the concentration of wealth and power in the hands of so few. In combining sure theoretical and conceptual political and historical analysis with example after example and case study after case study of rising plutocrats and their political minions reshaping our body politic, Formisano strips away the myths and illusions of mainstream apologists of our present state and illuminates the changing face of political-economic power in America that no previous work has managed so far to achieve. While not for the faint of heart, it speaks loudly and boldly to those progressive forces searching for avenues of renewal for our current political plight.”--Ernest J. Yanarella, author of North American Auto Unions in Crisis: Lean Production as Contested Terrain