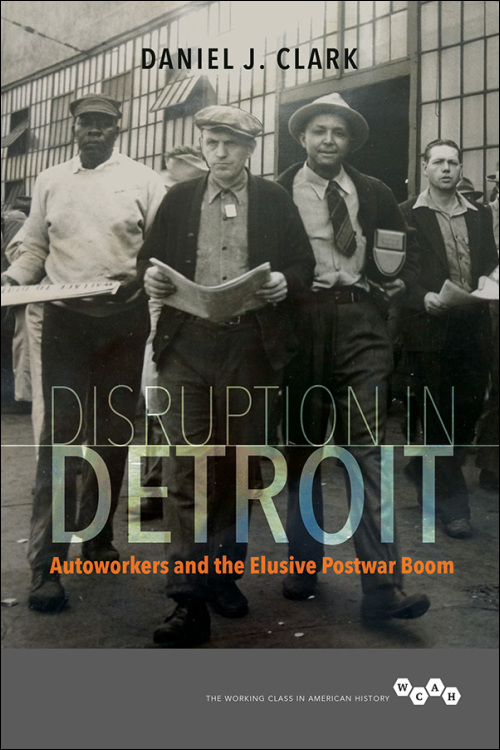 It is a bedrock American belief: the 1950s were a golden age of prosperity for autoworkers. Flush with high wages and enjoying the benefits of generous union contracts, these workers became the backbone of a thriving blue-collar middle class.

It is also a myth. Daniel J. Clark began by interviewing dozens of former autoworkers in the Detroit area and found a different story--one of economic insecurity marked by frequent layoffs, unrealized contract provisions, and indispensable second jobs. Disruption in Detroit is a vivid portrait of workers and an industry that experienced anything but stable prosperity. As Clark reveals, the myths--whether of rising incomes or hard-nosed union bargaining success--came later. In the 1950s, ordinary autoworkers, union leaders, and auto company executives recognized that although jobs in their industry paid high wages, they were far from steady and often impossible to find.

Daniel J. Clark is an associate professor of history at Oakland University, Michigan. He is the author of Like Night and Day: Unionization in a Southern Mill Town.

"Its careful consideration of large economic trends balanced with personal interviews provides readers with a good portrait of the actual struggles of what some have (perhaps mistakenly) called the 'aristocracy of American labor.'" --The Michigan Historical Review

"Disruption in Detroit breaks ground for exciting new research questions and debates in this crucial period of working-class history. Clark's work should prompt historians of the United States, Canada, and beyond to rethink and re-examine post-war working-class lives." --Labour/Le Travail

"Disruption in Detroit should take its place near the top of this reading list. Clark masterfully details the struggles of autoworkers who faced economic upheaval at the core of the midcentury industrial economy." --Labor Studies in Working-Class History

"Exposes the myth of the prosperous postwar auto worker and deftly deals with the delicate interplay among larger national economic forces, auto industry and auto union policies, and the lives of those who labored and lived in the Motor City in the decade and a half after World War II."--Stephen Meyer, author of Manhood on the Line: Working Class Masculinities in the American Heartland

"Well-written and well-researched, this book challenges and transforms the way we understand the immediate postwar era. Daniel Clark closely examines auto work and ordinary autoworkers, people whose lives have been overwhelmed by the narrative of postwar economic expansion and overlooked by most scholars. The vaunted economic boom was not the vehicle for the making of the Detroit middle class, Clark shows. Detroit autoworkers and their families experienced the same job instability and economic insecurity that had long shaped working-class life and labor. Attentive to gender and race, Clark offers an astute and cogent argument informed by wide and deep research in newspapers and close listening to and reading of oral histories. Providing a startling, different perspective on the postwar boom and the alleged heyday of the United Auto Workers when high wages and benefits pushed autoworkers into the middle class, the book requires revision of modern American history as well as midcentury labor history."--Nancy Gabin, author of Feminism in the Labor Movement: Women and the United Auto Workers, 1935–1970