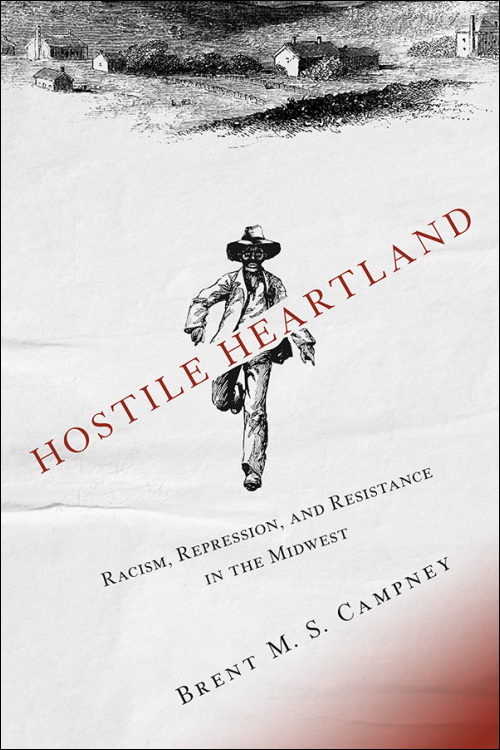 We forget that racist violence permeated the lower Midwest from the pre–Civil War period until the 1930s. From Kansas to Ohio, whites orchestrated extraordinary events like lynchings and riots while engaged in a spectrum of brutal acts made all the more horrific by being routine. Also forgotten is the fact African Americans forcefully responded to these assertions of white supremacy through armed resistance, the creation of press outlets and civil rights organizations, and courageous individual activism.

Drawing on cutting-edge methodology and a wealth of documentary evidence, Brent M. S. Campney analyzes the institutionalized white efforts to assert and maintain dominance over African Americans. Though rooted in the past, white violence evolved into a fundamentally modern phenomenon, driven by technologies such as newspapers, photographs, automobiles, and telephones. Other surprising insights challenge our assumptions about sundown towns, the people targeted by whites, law enforcement's role in facilitating and perpetrating violence, and the details of African American resistance.

Brent M. S. Campney is an associate professor of history at the University of Texas Rio Grande Valley. He is the author of This Is Not Dixie: Racist Violence in Kansas, 1861–1927.

"There is much in this volume that is smart and thought-provoking, and I believe that it will inspire a number of more-detailed studies of such violence in the Midwest. . . . Campney provides a thought-provoking discussion of the possibility of numerous private lynchings in the 1930s and beyond, episodes driven into obscurity by concern over how they would reflect upon communities; I believe that on this subject and the others raised in this volume, multiple dissertations will be launched." --Indiana Magazine of History

"Campney has written an ambitious, well-researched, and valuable study that deepens our understanding of just how commonplace and horrific mob violence . . . was over the course of more than a century. . . . He is particularly sensitive to what he calls ‘the multigenerational effects’ of racial violence on African Americans." --Missouri Historical Review

"Hostile Heartland is the result of prodigious research informed by recent scholarship that grapples with the definition of lynching itself. . . . [Campney] is careful to never reduce the black residents of the Midwest to mere victims and devotes considerable space to accounts of black agency and resistance. . . . Campney’s most timely argument [is] that in the twentieth century an increasingly professional police force and court system both quelled racist mobs and essentially assumed their role in maintaining white supremacy. [Campney makes] a notable contribution by positing a long history of northern lynching, and this work will be of interest to scholars of U.S. racial violence and black exclusion." --Pacific Historical Review

"Hostile Heartland challenges assumptions about the 19th-century Midwest as ‘a land of pastoral virtue – a ‘Garden of Eden’ – where racist violence was anomalous.’ On the contrary, Campney argues that in the antebellum era ‘white mobs in the Midwest most certainly lynched free blacks and fugitive slaves. . . . The entire text would be useful in upper-division undergraduate courses and is essential for graduate-level study on racist violence and Midwestern history." --Choice

"Hostile Heartland is a thickly researched survey that draws a striking picture of just how precarious life was for African American migrants to the Midwest." --Journal of Southern History

"Brent Campney's Hostile Heartland: Racism, Repression, and Resistance in the Midwest is an excellent and much needed historical account. . . . Well-written and succinct, this book powerfully documents an oft-forgotten practice in the Midwest, decentering the South as the only region with a very long history with anti-black violence." --Annals of Iowa

"Brent M. S. Campney returns to the themes of his groundbreaking work This is Not Dixie: Racist Violence in Kansas, 1861-1927 in which he argued that white Kansans liked to imagine that their state was a model of enlightened progress in race relations. . . . Hostile Heartland thoroughly and convincingly documents the chilling ferocity of racist violence." --Kansas History

"With clear, engaging prose, Campney's Hostile Heartland: Racism, Repression, and Resistance in the Midwest speaks to the historiographies of the Midwest's importance, lynching and antiblack violence more generally, and activism." --American Historical Review

"Brent M. S. Campney details lynchings and other forms of anti-Black violence from the antebellum era to the 1940s in Ohio, Indiana, Illinois, Missouri, and Kansas. . . . Hostile Heartland succeeds in demonstrating that the Midwest was not paradise for African Americans." --Journal of African American History

"In this very smart book, Brent Campney builds upon his vast research unearthing the history of racist violence in America’s heartland. Hostile Heartland is a thorough and impressive work that challenges midwesterners’ time-honored penchant for claiming progressive superiority over the South when it comes to matters of racial egalitarianism and violence. Any reader who has ever contemplated race relations or racist violence in the Midwest today will find clear answers and lines linking the present to the past within these pages. Hostile Heartland opens much-needed windows onto the histories of race relations in the Midwest and the Great Migrations of African Americans to the region."—Kidada E. Williams, author of They Left Great Marks on Me: African American Testimonies about Racial Violence from Emancipation to World War I