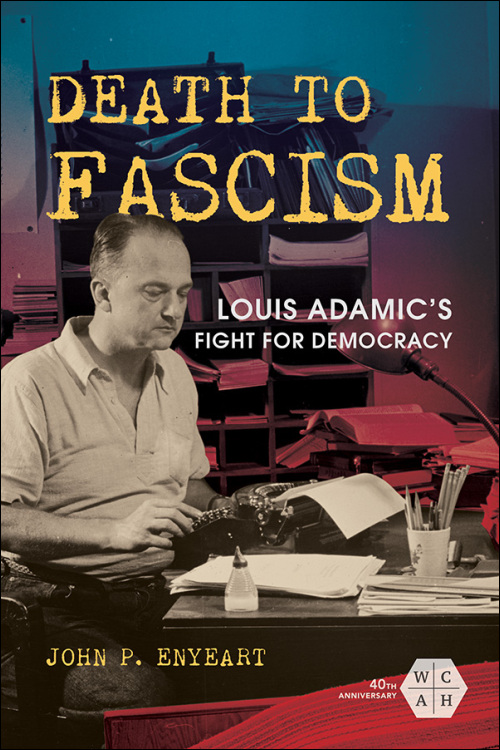 Born to Slovenian peasants, Louis Adamic commanded crowds, met with FDR and Truman, and built a prolific career as an author and journalist. Behind the scenes, he played a leading role in a coalition of black intellectuals and writers, working-class militants, ethnic activists, and others that worked for a multiethnic America and against fascism.

John P. Enyeart restores Adamic's life to the narrative of American history. Dogged and energetic, Adamic championed causes that ranged from ethnic and racial equality to worker's rights to anticolonialism. Adamic defied the consensus that equated being American with Anglo-Protestant culture. Instead, he insisted newcomers and their ideas kept the American identity in a state of dynamism that pushed it from strength to strength. In time, Adamic's views put him at odds with an establishment dedicated to cold war aggression and white supremacy. He increasingly fought smear campaigns and the distortion of his views—both of which continued after his probable murder in 1951.

John P. Enyeart is professor and chair of the Department of History at Bucknell University. He is the author of The Quest for “Just and Pure Law”: Rocky Mountain Workers and American Social Democracy, 1870–1924.

"Because Enyeart has captured the life and work of an antifascist democratic radical who continues to resonate today, Death to Fascism is a major accomplishment. " --H-Net Reviews

"The objective of his book, Enyeart says, is 'recovering Adamic’s legacy so that we can better understand [that] our antifascist past is vital to our future' (p. 161). His well-researched book largely achieves its objective." --Journal of Cold War Studies

"Enyeart weaves together the questions of Americanism, immigration, antifascism, and foreign policy in a coherent and engaging fashion. . . . Death to Fascism is a well-written and engaging piece of historical research." --Social History

"Enyeart's work comes at a moment in which forging the multiracial, multiethnic, working-class-based, transnational antifascist movement Adamic championed is urgently necessary. . . . Death to Fascism is both praiseworthy and relevant to scholars and organizers alike." --North Median Review

"In this well-researched, original work, Enyeart establishes the importance of Louis Adamic as an influential political and cultural figure of the period between the 1930s and the early Cold War. Adamic's life reveals the presence of a robust anticolonialist and antifascist strand of thinking in the often-overlooked early twentieth century immigrant/ethnic Left."--John Bukowczyk, editor of Immigrant Identity and the Politics of Citizenship

"This is a very important book. It challenges the emphasis in so much recent radical history on the centrality—for good or ill—of the Communist Party, and sees the broader left, of which Adamic was a leading member, as central. Readers will come to care about Adamic, his struggles, and even his contradictions."--David Roediger, author of Class, Race, and Marxism