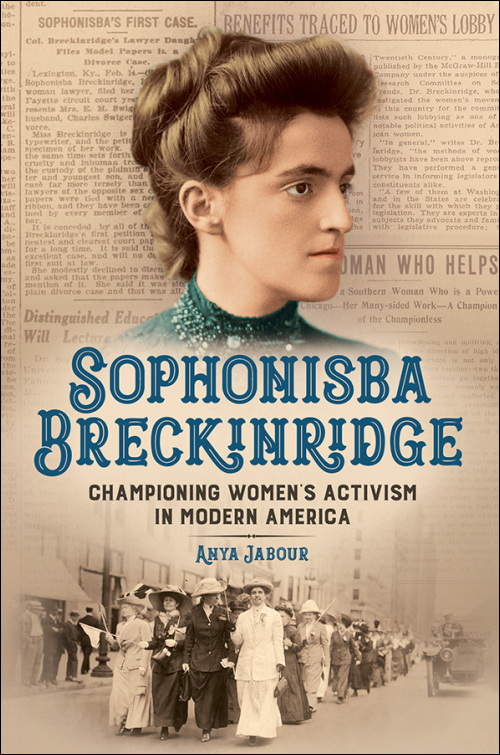 Sophonisba Breckinridge's remarkable career stretched from the Civil War to the Cold War. She took part in virtually every reform campaign of the Progressive and New Deal eras and became a nationally and internationally renowned figure. Her work informed women's activism for decades and continues to shape progressive politics today.

Anya Jabour's biography rediscovers this groundbreaking American figure. After earning advanced degrees in politics, economics, and law, Breckinridge established the University of Chicago's School of Social Service Administration, which became a feminist think tank that promoted public welfare policy and propelled women into leadership positions. In 1935, Breckinridge’s unremitting efforts to provide government aid to the dispossessed culminated in her appointment as an advisor on programs for the new Social Security Act. A longtime activist in international movements for peace and justice, Breckinridge also influenced the formation of the United Nations and advanced the idea that "women’s rights are human rights." Her lifelong commitment to social justice created a lasting legacy for generations of progressive activists.

Anya Jabour is Regents Professor of History at the University of Montana. Her books include Topsy-Turvy: How the Civil War Turned the World Upside Down for Southern Children and Scarlett's Sisters: Young Women in the Old South.

"A compelling biography that resurrects the life and times of this noteworthy feminist." --Booklist

"A masterly contribution to the history of American women. Academics and general readers alike will applaud this nuanced biography of a feminist who dedicated her life to public service and improving the lives of women." --Library Journal

"Anya Jabour has masterfully brought our attention to Sophonisba Preston Breckinridge, one of the most influential women of the Progressive era that no one knows. She centers Breckinridge in a dense contextualization of the period and proves without a doubt the significance of Breckingridge's wide-ranging social activism." --Journal of Southern History

"Anya Jabour's Sophonisba Breckinridge: Championing Women's Activism in Modern America reconstructs the life and work of a central figure in nearly every female-led progressive reform movement of the early twentieth century. . . . Engaging and informative, Sophonisba Breckinridge is sure to please readers of all backgrounds." --Journal of the Illinois State Historical Society

"We are witnessing a renaissance in the crafting of biography. . . . Anya Jabour provides a twist on the genre by organizing the bulk of the book topically rather than chronologically. . . .The best one-volume synthesis of the social justice legacy of Progressive Era reform feminism." --American Historical Review

"In this engaging, crisply written biography, Anya Jabour tells the life story of the groundbreaking, if lesser-known, social reformer Sophonisba Breckinridge. . . . Jabour skillfully and delicately renders a portrait of a women of extraordinary intelligence and strength." --Register of the Kentucky Historical Society

"In propulsive prose, Anya Jabour brings to life progressive feminist Sophonisba Breckinridge, whose forty-year career as an advocate for social justice provides a model of 'passionate patience' for progressives in the twenty-first century."--Robyn Muncy, author of Relentless Reformer: Josephine Roche and Progressivism in Twentieth-Century America

"Anya Jabour has written an outstanding biography of Sophonisba Breckinridge. She has thoroughly convinced me of Breckinridge's important role in American and women's history and how much of each is revealed by her lifelong activism. The research is expansive and the writing is flawless."--Joan M. Johnson, author of Funding Feminism: Monied Women, Philanthropy, and the Women's Movement, 1870–1967

Listen to an interview with Anya Jabour on the New Books NetworkSTRIVING FOR SOCIAL JUSTICE: JANE ADDAMS AND SOPHONISBA BRECKINRIDGEListen to Anya Jabour's book talk at the Newberry Library"When Lesbians Led the Suffrage Movement" in The ConversationRead an op-ed in the by Anya Jabour