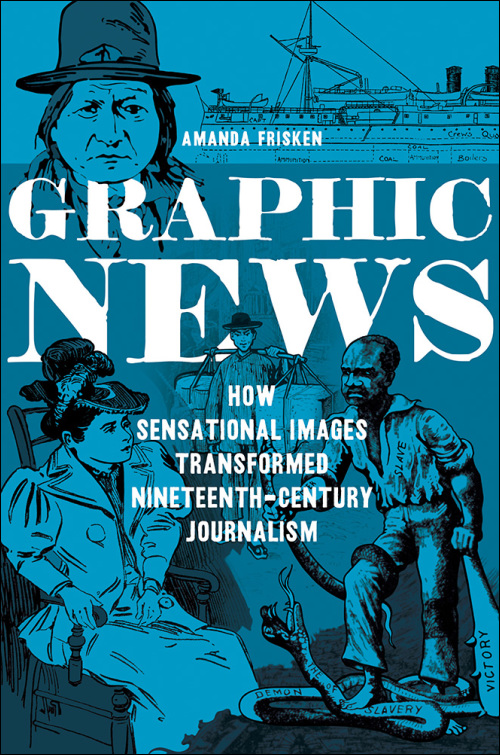 "You furnish the pictures and I’ll furnish the war." This famous but apocryphal quote, long attributed to newspaper magnate William Randolph Hearst, encapsulates fears of the lengths to which news companies would go to exploit visual journalism in the late nineteenth century. From 1870 to 1900, newspapers disrupted conventional reporting methods with sensationalized line drawings. A fierce hunger for profits motivated the shift to emotion-driven, visual content. But the new approach, while popular, often targeted, and further marginalized, vulnerable groups.

* Publication of this book was supported in part by a grant from Furthermore: a program of the J. M. Kaplan Fund.

Amanda Frisken is a professor of American Studies at SUNY College at Old Westbury. She is the author of Victoria Woodhull's Sexual Revolution: Political Theater and the Popular Press in Nineteenth-Century America.

"An intriguing analysis of the manner in which sensational pictorial representations altered US journalism during the final three decades of the 19th century. . . . Well researched with an extensive reliance on primary documents." --Choice

"A comprehensive and thoughtful exploration of the role of sensationalism in visual news, Graphic News will be of particular value for scholars and students of late nineteenth-century visual culture, journalism history, communication, and American Studies." --Journal of the Gilded Age and Progressive Era

"This generously illustrated book delves into the period just before the end of the nineteenth century when America was beginning to take its place in the world. It would be useful to anyone teaching or researching that formative period. It is accessible and attractive. Ironically enough, its extensive use of graphic pictures from the period make it not only an informative but entertaining read." --American Journalism

"A deeply researched and acutely observed social and cultural history of journalism that, with particular attention to popular visual media, delineates the ways publications' reportorial conventions and practices shaped and were shaped by the era's gender, race, and class relations."--Joshua Brown, author of Beyond the Lines: Pictorial Reporting, Everyday Life, and the Crisis of Gilded Age America

"A worthy endeavor that engages major social and cultural issues and makes a significant contribution to the history of visual journalism in the United States."--John Coward, author of Indians Illustrated: Images of Native Americans in the Pictorial Press

Read a Q&A with Amanda Frisken