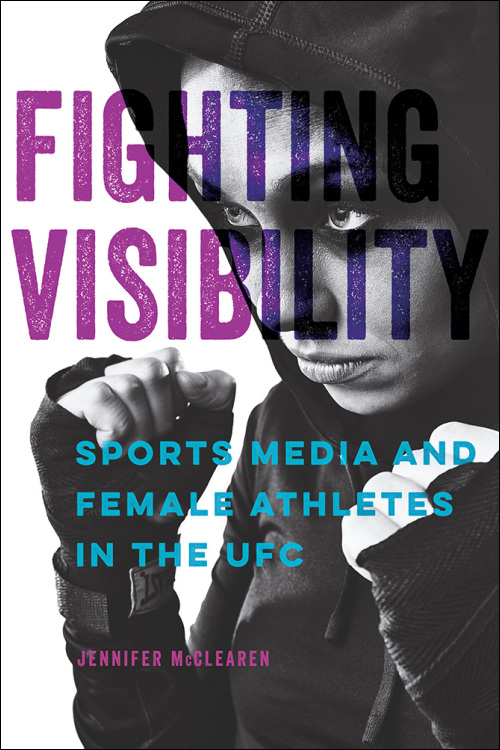 Mixed-martial arts stars like Amanda Nunes, Zhang Weili, and Ronda Rousey have made female athletes top draws in the Ultimate Fighting Championship (UFC). Jennifer McClearen charts how the promotion incorporates women into its far-flung media ventures, and she investigates the complexities surrounding female inclusion. On the one hand, the undeniable popularity of cards headlined by women add much-needed diversity to the sporting landscape. On the other, the UFC leverages an illusion of promoting difference—whether gender, racial, ethnic, or sexual—to grow its empire with an inexpensive and expendable pool of female fighters. McClearen illuminates how the UFC's half-hearted efforts at representation generate profit and cultural cachet while covering up the fact it exploits women of color, lesbians, gender non-conforming women, and others.

Thought provoking and timely, Fighting Visibility tells the story of how a sports entertainment phenomenon made difference a part of its brand—and the ways women paid the price for success.

Jennifer McClearen is an assistant professor in the Department of Radio-Television-Film at the University of Texas at Austin.

"With an extensive bibliography, this well-researched account sheds insight into the various issues that women in sport face, and the costs of their high visibility. . . . Highly recommended. " --Library Journal

"The book is a fascinating read. . . . McClearen has written a compelling history of women in the UFC, along with the trials they have faced." --Sport in American History

"McClearen urges scholars to move beyond dichotomous notions of visibility and to consider the cultural and material consequences of being seen. . . . Centering the well-being and lived experienced of female athletes, McClearen's Fighting Visibility provides a strong foundation on which to build a sustained critique of the relationship between media visibility and exploitation." --Media Industries

"Fighting Visibility demonstrates that female fighters are encouraged to imagine opportunities for professional success through UFC despite several significant ways in which these athletes are exploited. UFC positions the success of Ronda Rousey as something for both athletes and fans to emulate, following the notion that 'if you can see her, you can be her.' Yet McClearen's research shows that Rousey's success is exceptional and only portrayed as typical, rendering opportunity a likely facade." --Journal of Sport History

"A scathing critique of the exploitation that defines the relationship of the UFC to its women fighters, Fighting Visibility fills a hole in the study of sports. Never has this subject been explored with the depth and clarity that we have here. A necessary and groundbreaking read. It makes the point with crystal clarity: visibility and equity are not the same thing."--Dave Zirin, sports editor, The Nation

"A must read for anyone interested in women, sport, and the media. Written by a quickly rising star in feminist media and communication studies, this book is a highly engaging account of the politics of women's participation and visibilities in the UFC. It artfully identifies and explains important new trends in social media, branding, feminism, sport, and popular culture. Highly recommended reading!"--Holly Thorpe, author of Transnational Mobilities in Action Sport Cultures