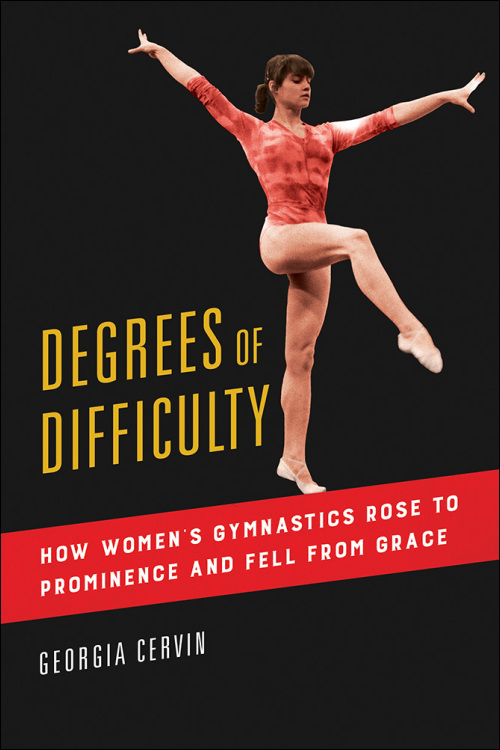 Electrifying athletes like Olga Korbut and Nadia Comaneci helped make women’s artistic gymnastics one of the most popular events in the Olympic Games. But the transition of gymnastics from a women’s sport to a girl’s sport in the 1970s also laid the foundation for a system of emotional, physical, and sexual abuse of gymnasts around the world. Georgia Cervin offers a unique history of women's gymnastics, examining how the high-stakes diplomatic rivalry of the Cold War created a breeding ground for exploitation. Yet, a surprising spirit of international collaboration arose to decide the social values and image of femininity demonstrated by the sport. Cervin also charts the changes in style, equipment, training, and participants that transformed the sport, as explosive athleticism replaced balletic grace and gymnastics dominance shifted from East to West.

Sweeping and revelatory, Degrees of Difficulty tells a story of international friction, unexpected cooperation, and the legacy of abuse and betrayal created by the win-at-all-cost attitudes of the Cold War.

Georgia Cervin is an Honorary Research Fellow at the University of Western Australia and a former international gymnast.

"Degrees of Difficulty is an important read and makes the case for necessary changes to a sport that millions love to watch but whose institutional history few understand." --Journal of Sport History

"Georgia Cervin's Degrees of Difficulty is an enthralling analysis of elite women's gymnastics, from a scholar's and insider's view. Through carefully applied lenses of gender, race, power, and politics, Cervin exposes the historical underbelly of cheating, bribery, abuse, and political manipulation in one of the world's most popular Olympic Sports."--Kevin B. Wamsley, coauthor of Sport in Canada: A History, fourth edition