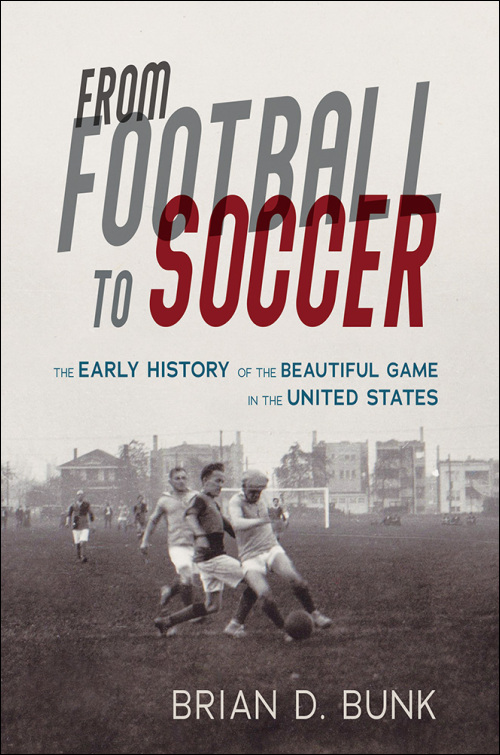 Across North America, native peoples and colonists alike played a variety of kicking games long before soccer's emergence in the late 1800s. Brian D. Bunk examines the development and social impact of these sports through the rise of professional soccer after World War I. As he shows, the various games called football gave women an outlet as athletes and encouraged men to form social bonds based on educational experience, occupation, ethnic identity, or military service. Football also followed young people to college as higher education expanded in the nineteenth century. University play, along with the arrival of immigrants from the British Isles, helped spark the creation of organized soccer in the United States—and the beautiful game's transformation into a truly international sport.

A multilayered look at one game’s place in American life, From Football to Soccer refutes the notion of the U.S. as a land outside of football history.

Brian D. Bunk is a senior lecturer in the history department at the University of Massachusetts. He is the author of Ghosts of Passion: Martyrdom, Gender, and the Origins of the Spanish Civil War and coeditor of Nation and Conflict in Modern Spain: Essays in Honor of Stanley G. Payne.

"An impressive volume which does not claim to be the final word on US soccer history, and gives historians potential new avenues and approaches towards the subject matter." --Idrottsforum

"An important addition to the publisher's Sport and Society series. . . . Recommended." --Choice

"Bunk presents an innovative look at early American soccer history that should help put to rest any notion of the United States as a place exceptional among soccer-playing nations. Individual chapters within From Football to Soccer can stand alone as readings for undergraduate courses, and the book is a valuable resource for all who study the history of football codes." --Journal of Sport History

"An excellent addition. . . From Football to Soccer undoubtedly adds much to the historiography of soccer in the United States." --Journal of Popular Culture

"This excellent and timely history on the origins of football in North America fills an important gap. As soccer grows in popularity today, Brian Bunk shows that it has been part of the sporting scene for many centuries. This book is especially welcome for its thorough discussion of Native American football's long history, and the all-too-often understated role of women in the early development of the game on the continent. This book is essential reading for historians of sport, and an absorbing read for the casual soccer/football fan."--Stefan Szymanski, coauthor of Soccernomics: Why England Loses, Why Germany, Spain, and France Win, and Why One Day Japan, Iraq, and the United States Will Become Kings of the World's Most Popular Sport