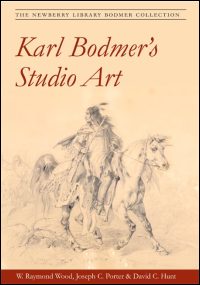 To document the natural history and inhabitants of the American West, Prince Maximilian of Wied-Neuwied brought along Swiss artist Karl Bodmer on his 1833-34 expedition up the Missouri River. Bodmer's landscapes and portraits--later published as aquatints and woodcuts--are now considered the most vivid depiction of the nineteenth-century American West prior to the decimation of Plains tribes by disease.

In paperback for the first time, this remarkable volume collects Bodmer's studio augmentations of the expeditionary sketches, and brings together nearly all of Bodmer's extant works not previously collected in book form. The book is framed by W. Raymond Wood's introduction and annotations of the artwork, Joseph C. Porter's examination of the expedition's scientific and intellectual significance, and David C. Hunt's historical summary of the publication of Bodmer's North American work.

"Karl Bodmer's stunning watercolors of his 1833-34 expedition up the Missouri River have been known for decades, but Karl Bodmer's Studio Art goes beyond previous publications to explore the intellectual context of the expedition as well as the prints that accompanied Prince Maximilian's 1839 book."--Ron Tyler, director of the Texas State Historical Association

W. Raymond Wood is a professor of anthropology at the University of Missouri-Columbia. He is coauthor of The Prehistory of Missouri. Joseph C. Porter is chief curator of the North Carolina Museum of History and the author of Paper Medicine Man: John Gregory Bourke and His American West. David C. Hunt is director of the Stark Museum of Art in Orange, Texas.