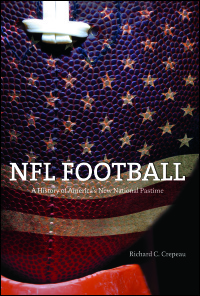 Founded as an obscure sports body, the National Football League has grown into a multi-billion-dollar colossus and cultural phenomenon at the center of American sports.

In this wide-ranging history, Richard C. Crepeau synthesizes scholarship and media sources to give the reader an inside view of the television contracts, labor issues, and other forces that shaped the league off the field and all too often determined a team's success on it. He devotes significant attention to Commissioner Pete Rozelle's leadership during an explosive period of growth fueled in part by pro football's conquest of Monday nights, the merging of celebrity and athletics, and the transformation of the Super Bowl into a mid-winter spectacle with record TV ratings. Crepeau also delves into the league's masterful exploitation of media from radio to the internet, its ability to get taxpayers to subsidize team stadiums, and its success in delivering an outlet for experiencing vicarious violence to a public uneasy over the changing rules of masculinity.

"A solid resource for researchers and historians."--Library Journal

“[Crepeau] has brought together from a great many sources the information necessary to anyone who wants to understand the origins and the workings of the powerful and profitable entertainment vehicle the NFL has become.”--Bill Littlefield, NPR’s Only a Game

"Provides an important back-story on the spectator sport that has become as much a national pastime as a political lightning rod. NFL Football offers a fascinating lens through which to view some of the major themes of twentieth-century US History. Crepeau provides readers with the tools to begin unpacking some of professional football's many contradictions."--American Studies

"NFL Football: A History of America's New National Pastime chronicles the NFL's growth in an insightful manner that is valuable to all NFL fans. This thorough research by Richard Crepeau does more than provide historical facts, it explains the league's business from an economic and media perspective in a way that no other book has. No understanding of the history of the NFL and its societal impact is complete without reading this book."--John A. Fortunato, author of Commissioner: The Legacy of Pete Rozelle

"Brings to the table a much needed history of professional football, especially for his examination of the NFL in the second half of the twentieth century. On one side he shows no reverence for the NFL as he clearly highlights its flaws and problems. But Crepeau also has an appreciation for the NFL as a business and for all that its owners/administrators have achieved."--Melvin L. Adelman, author of Sporting Time: New York City and the Rise of Modern Athletics

Richard C. Crepeau is a professor of history at the University of Central Florida and former president of the North American Society for Sports History. He is the author of Baseball: America's Diamond Mind, 1919-1941.