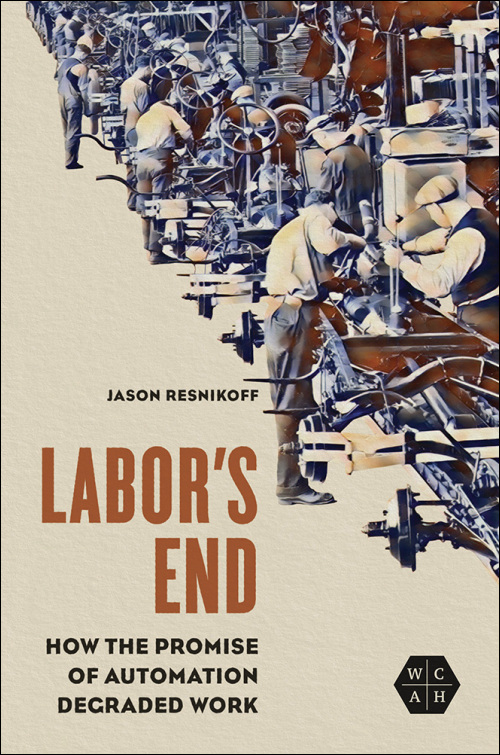 Labor's End traces the discourse around automation from its origins in the factory to its wide-ranging implications in political and social life. As Jason Resnikoff shows, the term automation expressed the conviction that industrial progress meant the inevitable abolition of manual labor from industry. But the real substance of the term reflected industry's desire to hide an intensification of human work--and labor's loss of power and protection--behind magnificent machinery and a starry-eyed faith in technological revolution. The rhetorical power of the automation ideology revealed and perpetuated a belief that the idea of freedom was incompatible with the activity of work. From there, political actors ruled out the workplace as a site of politics while some of labor's staunchest allies dismissed sped-up tasks, expanded workloads, and incipient deindustrialization in the name of technological progress.

Jason Resnikoff is a lecturer in the Department of History at Columbia University.

"Labor's End not only shows how the automation discourse was and is mystifying but also demonstrates the political consequences of its adoption on the Right and the Left. There is no technological fix for the political problems of work, Resnikoff reminds us. . . . Labor's End will be seen by future historians as a book that freshly reinterpreted the past to inform the politics of the present." --H-Sci-Med-Tech

"The history recounted in Labor’s End helps arm us to counter fallacious reasoning about automation and advocate for shifting the workplace toward greater worker power, dignity, and prosperity. Resnikoff’s probing analysis directs our gaze away from the “shiny objects” of new technology and redirects it to where it belongs — on workers." --Catalyst

"Resnikoff's forceful and coherent argument reveals that automation was not a technological process but an ideology which equated freedom with freedom from work and downplayed the workplace as a site of politics. As he convincingly shows, automation largely did not lead to a reduction in labor but rather to speedup, work intensification, and the degradation of labor, creating a huge chasm between the grandiose claims made about an automated future and the lived reality of workers."--Joshua Freeman, author of Behemoth: A History of the Factory and the Making of the Modern World