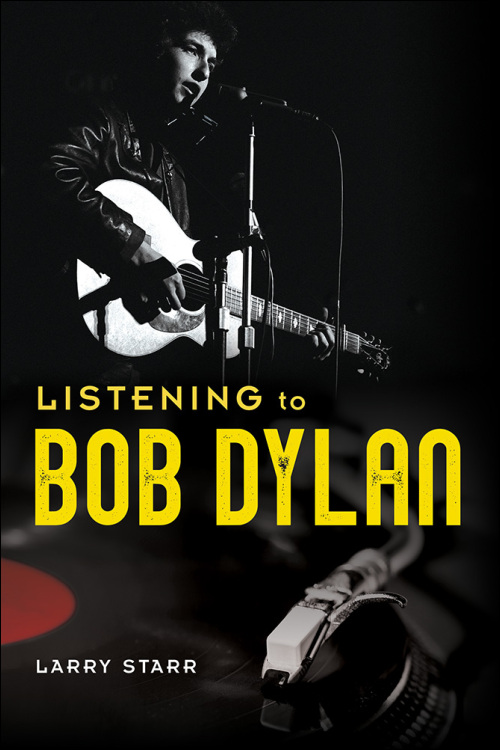 Venerated for his lyrics, Bob Dylan in fact is a songwriting musician with a unique mastery of merging his words with music and performance. Larry Starr cuts through pretention and myth to provide a refreshingly holistic appreciation of Dylan's music. Ranging from celebrated classics to less familiar compositions, Starr invites readers to reinvigorate their listening experiences by sharing his own—sometimes approaching a song from a fresh perspective, sometimes reeling in surprise at discoveries found in well-known favorites. Starr breaks down often-overlooked aspects of the works, from Dylan's many vocal styles to his evocative harmonica playing to his choices as a composer. The result is a guide that allows listeners to follow their own passionate love of music into hearing these songs—and personal favorites—in new ways.

Larry Starr is emeritus professor of music history at the University of Washington. He is the author of George Gershwin and coauthor of American Popular Music: From Minstrelsy to MP3, sixth edition.

" A fascinating, worthwhile study of Bob Dylan as poet, vocalist, composer, and performer. If you’re looking for a guide to Dylan’s methods, his genius, and what’s on the tracks, don’t think twice." --Library Journal(starred review)

"What Starr’s book does, and does very well, is encourage you to look past the many years of achievement and awards and re-focus on Dylan the songwriter. It makes you appreciate just what an outstanding songwriter he has always been. It’s not just the words – it’s the way the words work with the music and the way he creates storylines and characters in a way that literature can’t do. He may well be a great poet but, first and foremost, he is a great songwriter and that’s what this book makes you appreciate." --Americana UK

"Compact and cogent, Listening to Bob Dylan is directed to the general public, not musicologists. Starr describes Dylan’s sophisticated development of nuances, musical stress points that shift the tone of his performance and the meaning of his words. " --Shepherd Express

"Starr’s deep passion for helping listeners hear the intricate musical patterns of Dylan’s songs and albums provides the foundation for this out-of-the-ordinary guide to Dylan. The best way to read this book, of course, is to have Dylan’s music playing in the background to hear the patterns and sounds Starr encourages us to hear." --No Depression

“In this fresh and expansive book, Starr invites us to reach beyond the Nobel-winning lyrics and finally hear the brilliance of Dylan's work as a performer, arranger, composer, and vocal stylist.  Each chapter is a lively, accessible masterclass that will make you return again to even the most familiar songs with a sense of wonder and surprise.”--Sean Latham, editor of The World of Bob Dylan

“Larry Starr’s Listening to Bob Dylan is a refreshing addition to the ever-growing literature about Bob Dylan. Unlike most books on the subject, which tend toward extensive biography, exhaustive lyrical analysis, or trivia-based one-upmanship, Starr takes a relatively novel tack: he approaches Dylan as a musician. Drawing upon his decades of popular music study and pedagogy, Starr deftly navigates Dylan’s six-decade career in a manner that is both informative and accessible, but most of all it is a pure joy to read.”--Mark A. Davidson, Archives Director, The Bob Dylan Archive

Read a Q&A with Larry Starr