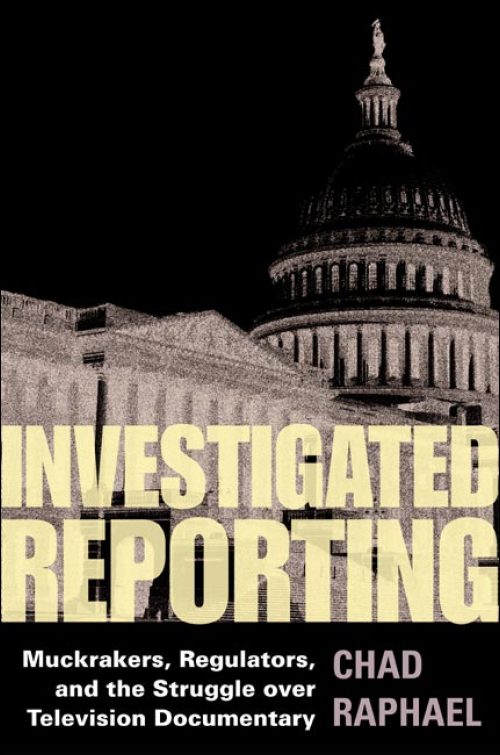 The public often views television investigative reporting as a watchdog on the government. In fact, some of the centerpiece moments of TV muckraking relied heavily on official sources for inspiration, information, and regulatory protection from critics. At the same time, criticism by government officials and overt threats to regulate the television industry influenced the decision-making and content that went into some of broadcast news's iconic moments.

Chad Raphael's looks at the relationship between journalism and regulation during the celebrated period of muckraking that took place on American television between 1960 and 1975. Raphael offers new insights into the economic, political, and industrial forces that shaped documentaries like Harvest of Shame, Hunger in America, and Banks and the Poor while placing the investigative television documentary into its institutional, regulatory, and cultural context. Throughout, Raphael exposes the complex strands of influence used by government officials to shape--and attack--investigative reporting, and highlights how these tactics created a troubling legacy for the regulation of television news today.

Chad Raphael is a professor of communication at Santa Clara University. He is coeditor of Deliberation, Democracy, and Civic Forums: Improving Equality and Publicity.

"An insightful and valuable book about the history of television documentaries. It's a winner."--Journalism History

"This historically and conceptually rich account of fifteen years of television network investigative reporting adds in vitally important ways to our knowledge and understanding of how journalism works and what role it plays in a democratic society."--Ted Glasser, coauthor of Custodians of Conscience: Investigative Journalism and Public Virtue

“At once an imaginative history of Sixties television and a judicious reassessment of critical social theory regarding the politics of television news, Investigated Reporting examines some of the most controversial programs in the history of television, showing how the boundaries of acceptable journalism were negotiated during a momentous era of social and political controversy. Creative, incisive, and thorough, Raphael’s analysis makes a truly significant contribution to our understanding of complex social and institutional relations that shape the flow of images and ideas on television.”--Michael J. Curtin, author of Redeeming the Wasteland: Television Documentary and Cold War Politics

"Investigated Reporting is an excellent, ambitious work that both attempts and achieves much. With stunning breadth and erudition, Raphael effectively places the 1960s and 1970s investigative television documentary into context and offers very important insights into the forces that shaped the genre, as well as the effects of these documentaries on social and political issues."--Thomas Rosteck, author of See It Now Confronts McCarthyism: Television Documentary and the Politics of Representation

Recipient of the Frank Luther Mott--Kappa Tau Alpha Research Award at the Association for Education in Journalism and Mass Communication meeting (2006); Recipient of the 2006 History Division Book Award of the AEJMC; and winner of the 2005 Donald McGannon Award for Social and Ethical Relevance in Communications Policy Research.