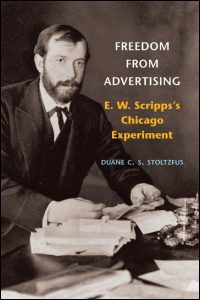 Disgusted by publishers and editors who refused to cover important stories for fear of offending advertisers, the press baron E. W. Scripps rejected conventional wisdom and set out to prove that an ad-free newspaper could be profitable entirely on circulation. Duane C. S. Stoltzfus details the history of Scripps’s innovative 1911 experiment, which began in Chicago amid great secrecy. The tabloid-sized newspaper was called the Day Book, and at a penny a copy, it aimed for a working-class market, crusading for higher wages, more unions, safer factories, lower streetcar fares, and women’s right to vote. It also tackled the important stories ignored by most other dailies, like the labor conflicts that shook Chicago in 1912.

Though the Day Book’s financial losses steadily declined over the years, it never became profitable, and publication ended in 1917. Nevertheless, Stoltzfus explains that the Day Book served as an important ally of workers, a keen watchdog on advertisers, and it redefined news by providing an example of a paper that treated its readers first as citizens with rights rather than simply as consumers.

Duane C. S. Stoltzfus is a professor of communication at Goshen College and the author of Pacifists in Chains: The Persecution of Hutterites during the Great War.

"Offering details about Scripps's campaign of secrecy surrounding the experiment, his dislike of department store executives, and his support for labor, this book is an important edition to the literature. . . . Recommended."--Choice

"This book's narrow focus on the Day Book makes an appealing case study of the financing and operating of an American newspaper."--Journal of American History

"A failed newspaper of the 1910s might seem to hold little relevance for the challenges of twenty-first century journalism. E.W. Scripps's Day Book, however, turns out to offer a case study about the complexities of two current seminal journalistic debates: the role of objectivity and the search for a viable business model to accommodate the industry's civic responsibility."--American Journalism

"Stoltzfus demonstrates that he is more than just an excellent researcher and writer. The author connects the mission of The Day Book almost 100 years ago with the twenty-first century world of the media."--Journalism History