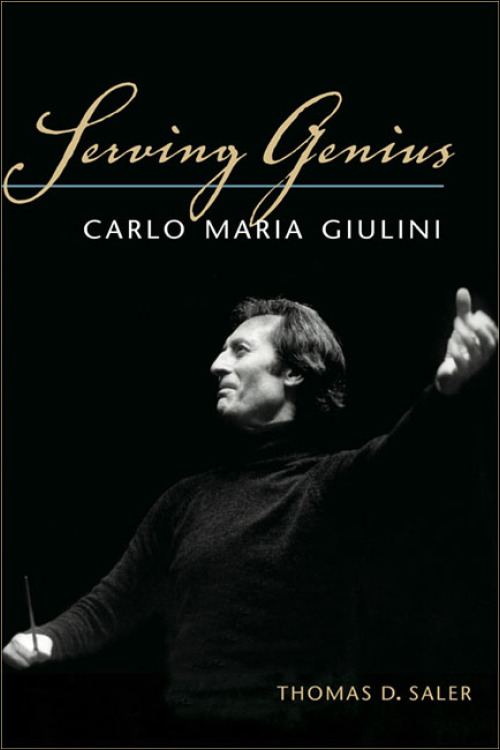 Serving Genius tells the life story of Carlo Maria Giulini, one of the most renowned and beloved conductors of the twentieth century. Detailing Giulini's extraordinary professional career, Thomas D. Saler also chronicles Giulini's personal life, including his musical awakening while growing up amid the spectacular beauty of the Dolomite mountains, his years as a student in Rome's Academy of St. Cecilia, his conscription into the Italian army during World War II, his nine months in hiding for his anti-fascist and pacifist beliefs, and his selfless devotion to his wife, Marcella.

A humble master who shunned the limelight, Giulini took a deeply emotional and subjective approach to making music. Saler provides uniquely detailed analysis of Giulini's nuanced musicianship and the way he conveyed that musicianship to the orchestra through physical gestures. Meditating on the very art of conducting at which Giulini excelled, Saler discusses each of the conductor's major musical appointments, including stints with the Chicago Symphony Orchestra, Philharmonia Orchestra, Vienna Symphony, and Los Angeles Philharmonic. The book also addresses his repertoire of choice, leadership style, and moral framework.

Drawing on extensive interviews with Giulini's family, music critics, arts administrators, orchestra members, and collaborating soloists, Serving Genius draws out the personal amid the professional life of this giant among twentieth-century conductors.

Thomas D. Saler is a conservatory-trained musician and was a longtime member of the Milwaukee Symphony Chorus. A freelance financial writer, Saler is the author of several books on personal finance, including All About Global Investing.

"A thorough, balanced and illuminating portrait of the charismatic Italian as man and maestro."--Chicago Tribune

"It was wonderful to get to know the man we have met so often in his music-making."--American Record Guide

"This engaging and extensive biography shows why Carlo Maria Giulini stood apart from other maestri, and above the fray: because of his gentle humanity, his spiritual resonance with music, and his uncompromising seriousness of purpose. This is certainly a book I will recommend to all the conductors I encounter, as well as others because it captures the essence of an uncommonly inspired and inspiring human being."--Kenneth Kiesler, conductor, director of orchestras at the University of Michigan, and director of the Conductors Retreat at Medomak and Conductors Programme at the National Arts Centre of Canada

"Thomas D. Saler's biography of the conductor Carlo Maria Giulini is worthy of the noble, deceptively complex subject. Saler paints an extraodinarily sensitive, comprehensive and illuminating portrait of an artist who was selflessly dedicated to his art. The author's enthusiasm is palpable, his reportage elevated by rare knowledge and passion."--Martin Bernheimer, 1982 Pulitzer Prize Winner for Criticism

Read an interview with the author, Thomas D. Saler, on The Well-Tempered Ear blog.