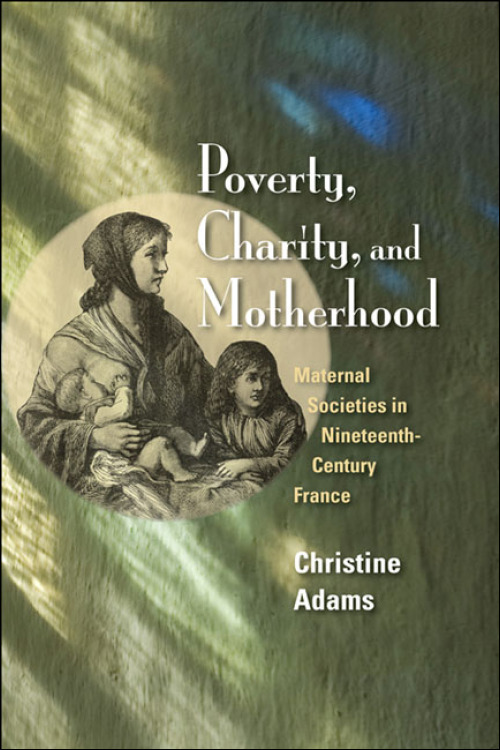 This far-reaching study of maternal societies in post-Revolutionary France focuses on the philanthropic work of the Society for Maternal Charity, the most prominent organization of its kind. Administered by middle-class and elite women and financed by powerful families and the government, the Society offered support to poor mothers, helping them to nurse and encouraging them not to abandon their children. In Poverty, Charity, and Motherhood, Christine Adams traces the Society's key role in shaping notions of maternity and in shifting the care of poor families from the hands of charitable volunteers with religious-tinged social visions to paid welfare workers with secular goals such as population growth and patriotism.

Adams plumbs the origin and ideology of the Society and its branches, showing how elite women in Paris, Lyon, Bordeaux, Rouen, Marseille, Dijon, and Limoges tried to influence the maternal behavior of women and families with lesser financial means and social status. A deft analysis of the philosophy and goals of the Society details the members' own notions of good mothering, family solidarity, and legitimate marriages that structured official, elite, and popular attitudes concerning gender and poverty in France. These personal attitudes, Adams argues, greatly influenced public policy and shaped the country's burgeoning social welfare system.

Christine Adams is a professor of history at St. Mary's College of Maryland and the author of A Taste for Comfort and Status: A Bourgeois Family in Eighteenth-Century France.

"Richly detailed, well grounded in existing historiography, yet fully willing to challenge existing notions. . . . An excellent monograph with applications in a wide variety of national and transnational historical fields, as well as in the study of the history of childhood."--H-Childhood

"Anyone who is interested in the history of the welfare state would do well to read it."--Journal of Interdisciplinary History

"An engaging story of the civic associations that women of privilege created and the ways in which women negotiated between their own expectations, public demands, and state interference."--H-France Review

"An absorbing and informative account of the largest and most important women's charity of its time."--French History

"The level of scholarship in the work is most impressive. Adams engages consistently with the historiography in such areas as maternalism, female philanthropy, and the history of the emotions, and she has amassed a substantial body of evidence by trawling through the comptes rendus of the various societies she has studied."--Enterprise & Society.

"Poverty, Charity, and Motherhood enables a fuller understanding of women's participatory activities in building civil society and provides a critical building block in our knowledge about the development of the welfare state. This book is essential for understanding the role of women's organizations and public policy.”--Rachel G. Fuchs, author of Contested Paternity: Creating Families in Modern France

"Christine Adams deepens our understanding of women's contributions to philanthropy and welfare work, a subject most histories deal with on a rather general level. The result is a genuinely fresh and informative view of this important topic."--Ann Taylor Allen, author of Feminism and Motherhood in Western Europe, 1890–1970: The Maternal Dilemma