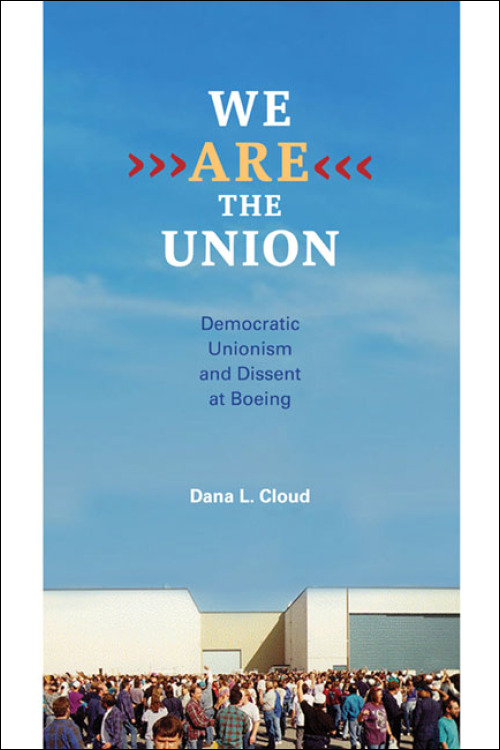 In this extraordinary tale of union democracy, Dana L. Cloud engages union reformers at Boeing in Wichita and Seattle to reveal how ordinary workers attempted to take command of their futures by chipping away at the cozy partnership between union leadership and corporate management. Taking readers into the central dilemma of having to fight an institution while simultaneously using it as a bastion of basic self-defense, We Are the Union offers a sophisticated exploration of the structural opportunities and balance of forces at play in modern unions told through a highly relevant case study. Focusing on the 1995 strike at Boeing, Cloud renders a multi-layered account of the battles between the company and the union and within the union led by Unionists for Democratic Change and two other dissident groups. She gives voice to the company's claims of the hardships of competitiveness and the entrenched union leaders' calls for concessions in the name of job security, alongside the democratic union reformers' fight for a rank-and-file upsurge against both the company and the union leaders.We Are the Union is grounded in on-site research and interviews and focuses on the efforts by Unionists for Democratic Change to reform unions from within. Incorporating theory and methods from the fields of organizational communication as well as labor studies, Cloud methodically uncovers and analyzes the goals, strategies, and dilemmas of the dissidents who, while wanting to uphold the ideas and ideals of the union, took up the gauntlet to make it more responsive to workers and less conciliatory toward management, especially in times of economic stress or crisis. Cloud calls for a revival of militant unionism as a response to union leaders' embracing of management and training programs that put workers in the same camp as management, arguing that reform groups should look to the emergence of powerful industrial unions in the United States for guidance on revolutionizing existing institutions and building new ones that truly accommodate workers' needs. Drawing from communication studies, labor history, and oral history and including a chapter co-written with Boeing worker Keith Thomas, We Are the Union contextualizes what happened at Boeing as an exemplar of agency that speaks both to the past and the future.

Dana L. Cloud is an associate professor of communication studies at the University of Texas, Austin, and the author of Consolation and Control in American Culture: Rhetorics of Therapy.

"Provides readers with the authentic voices of workers struggling to be heard."--Industrial and Labor Relations Review

"We Are the Union offers an excellent cautionary tale to union educators, activists, and leaders for finding ways to reinvigorate the American labor movement in the face of union bureaucracy and hostile employers and their political supporters."--Labor Studies Journal

"The book connects the subterranean intellectual tradition of militant worker history. . . . with struggles unfolding in the current political conjuncture. . . . An exceptional contribution to labor movement and rhetorical scholarship and the promise that the insights of this scholarship can impact the world beyond the walls of the academy."--Rhetoric Society Quarterly

"Dana Cloud explores how rank-and-file workers used their union both to advance their interests and to challenge the company. The author and her narrators together shape a history of a strong intra-union protest movement and expose the narrators' disagreements with one another about strategy along the way."--Oral History Review

"Dana Cloud's We are the Union demonstrates the importance of local actors in union change and renewal. . . . [and] how workers are aware of the various types of discrimination and their agency in navigating the spaces of discrimination. Various audiences. . . . could benefit from this text including labor scholars and activists, communications scholars and qualitative researchers."--Work, Employment and Society

"Dana L. Cloud raises vital, critical questions: Why have union reformers had so little success in the last thirty-five years? To what extent have their own analyses, actions, and choices contributed to the shortfalls or outright failures of their efforts? Given the deepening crisis of the U.S. labor movement, it is well past time to ask these questions. This will be a widely read and passionately contested contribution to contemporary labor history."--Peter Rachleff, author of Hard Pressed in the Heartland: The Hormel Strike and the Future of the Labor Movement

"We Are the Union is an important record and analysis of rank-and-file voices during a key period in the union democracy movement at Boeing. The depth of the conversations Dana L. Cloud documents, along with her engagement with workers' stories, disputes media propaganda that workers are selfish and think only of themselves rather than the greater common good."--Deepa Kumar, author of Outside the Box: Corporate Media, Globalization, and the UPS Strike