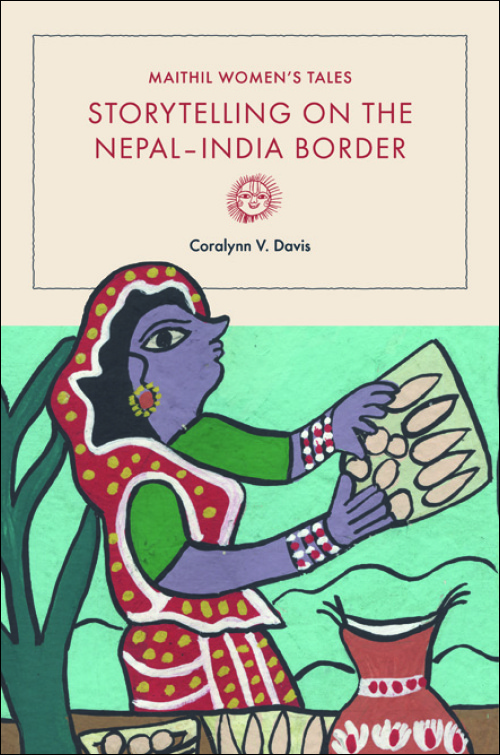 The Maithil women of the Himalayan region have long explored their individual and collective life experiences by sharing stories with one-another. Sometimes fantastical, sometimes including a kind of magical realism, these tales have helped women create community through a deeply personal and always evolving storytelling form.

In Maithil Women’s Tales, Coralynn V. Davis investigates how female storytellers weave together their own life experiences--the hardships and the pleasures--with age-old themes. In so doing, Davis demonstrates, they harness folk traditions to grapple with social values, behavioral mores, relationships, and cosmological questions.

The Maithil women’s storytelling tradition flourishes against a backdrop of cultural conventions that suppress women’s speech and mobility. Not surprisingly, many tales express the pain of contending with patrilineal household formations, the seclusions of purdah, and an honor system that values modesty and servility in women.

Each chapter includes stories and excerpts that reveal Maithil women’s gift for rich language, layered plots, and stunning allegory. In addition, Davis provides ethnographic and personal information to reveal the complexity of women’s own lives, and includes works painted by Maithil storytellers to illustrate their tales. The result is a fascinating study of being and becoming that will resonate for readers in women’s and Hindu studies, folklore, and anthropology.

Coralynn V. Davis is an associate professor of women’s and gender studies and anthropology at Bucknell University.

"Davis creates a momentous conversation between herself, her storytellers, and her audience. The part of the brain that enjoys a good story looks forward to getting lost in the next episode, while the social scientist can still pause between stories to wrestle with Davis over the deeper meanings of the plot and characterization. . . . This book is an incredibly creative combination of intriguing story and extensive ethnographic research that serves both as personal entertainment and as an addition to the social science of folkloric studies. In a world where primary orality and secondary orality are ever colliding, stories--and stories about stories--have become the common language."--Journal of Folklore Research

"Clearly a labor of love, and so welcome a feast of tales. . . . Maithil Women's Tales commendably forges an honest balance between pointing to oppressive gendered circumstances and celebrating women's diverse strategies to attain some kind of agency, not only in the story worlds, but in their everyday lives."--Western Folklore

"Davis provides a useful contextual analysis of Maithil folktales as told by the women who live along a border zone between India and Nepal. In her reader-friendly analysis she demonstrates that stories often have lives of their own, illuminating not only the nature of the cosmos, but also the relationship between the self and the worlds in which we live. The study provides valuable data on a region and narrative tradition understudied in the scholarly literature on South Asia."--Frank J. Korom, author of South Asian Folklore: A Handbook

"Davis's engagement with the tales related to Maithil women provides a counterpoint to the usual engagement with their Mithila paintings, the better known of Maithil women's expressive arts. Here we also learn not only the tales, but Maithil women's interpretations of them, not only in oral comments but in newly created paintings that highlight what they think are the key components of these tales. A must read for scholars of South Asian oral traditions and a major addition to women's expressive traditions more generally."--Susan S. Wadley, author of Wife, Mother, Widow: Exploring Women's Lives in Northern India

"This well-grounded, thoroughly researched study should appeal to a wide audience interested in oral narrative performance and interpretation, not only in South Asia, but more generally in disciplines ranging from folklore and cultural anthropology to narrative theory and gender studies. It shows convincingly how traditional folktales told by Maithil women of Nepal can mount socially effective critiques as resistance to patriarchal social principles that otherwise marginalize these women. It offers much for readers with interest in the dynamics of gender, in oral narrative performance and strategies of its interpretation in social context."--Margaret Mills, co-editor of South Asian Folklore: An Encyclopedia