Sociologist Norman K. Denzin characterized Lonnie Athens's earlier work as "the most far-reaching, provocative, and profound analysis of violent conduct" available in criminological literature. In Violent Criminal Acts and Actors Revisited, Athens returns to his pioneering work and finds that his premises are just as relevant and original as in their earlier version--and that they have been curiously, and to society's detriment, overlooked.

Rather than finding the causes of criminal behavior in external forces or personality disorders, as conventional wisdom often does, Athens renews his fundamental argument that a violent situation comes into being when defined by an individual as a situation that calls for violence--that an actor responds to the circumstance as he or she defines it. Based on the author's many firsthand interviews with offenders and on his personal experience, Violent Criminal Acts and Actors Revisited augments Athens's call to reexamine the source and locus of violent criminal behavior.

Lonnie Athens, an associate professor in the criminal justice department at Seton Hall University, has testified in court as an expert witness on violent crimes. He is the author of The Creation of Dangerous Violent Criminals. 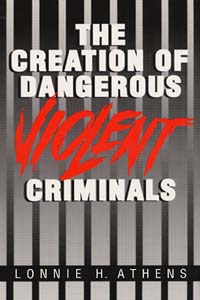 "This is a brilliant extension of hi [Athens's] earlier work, and it is certain to gain well-deserved public and scholarly attention. Refusing biological, psychological, structural, and statistical modes of reasoning, he follows Herbert Blumer's injunction to meet and confront the empirical world of violence on its own terms."-Norman K. Denzin, author of Hollywood Shot by Shot