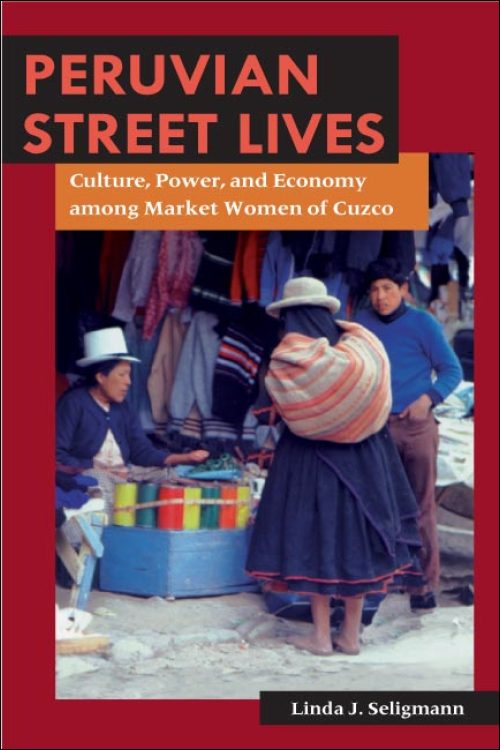 For more than twenty years, Linda J. Seligmann walked the streets of Peru in city and countryside alike, talking to the women who work in the informal and open-air markets in Cuzco's Andean highlands. Her combination of ethnographic analysis, insightful and human vignettes, and superb photographs offers a humane yet incisive portrait of the women's lives against the backdrop of globalization and other powerful forces.

In Peruvian Street Lives, Seligmann argues that the sometimes invisible and informal economic, social, and political networks market women establish may appear disorderly and chaotic, but in fact often keep dysfunctional economies and corrupt bureaucracies from utterly destroying the ability of citizens to survive from day to day. Seligmann asks why the constructive efforts of market women to make a living provoke such negative social perceptions from some members of Peruvian society, who see them as symbols and actual catalysts of social disorder. At the same time, Seligmann shows how market women eke out a living, combat discrimination, and transgress racial and gender ideologies within the rich and expressive cultural traditions they have developed.

"Peruvian Street Lives captures the lives, the daily rhythms, passions, and politics of the women who crowd Cuzco's markets and streets. Seligmann breaks through surface understandings and misperceptions of these women and their work and offers us a rich stew, a close view of their everyday challenges and the cultural logic of the Andean marketplace. I look forward to using this book in teaching."--Florence Babb, University of Iowa

Cited as one of two Leeds Honor Books for 2006 by the Society for Urban, National, and Transnational/Global Anthropology (SUNTA).