Departing from simple observations of the people and setting around him-- neighbors, friends, and lovers in New York City--Stephen Cramer's Shiva's Drum explores personal and familial relationships set to the rhythms of jazz in an urban landscape. Though comfortable at the edge, these poems deal with reality and move forward by transforming pain into beauty.

Stephen Cramer has published in numerous journals, including Atlanta Review, Crab Orchard Review, Mid-American Review, and Quarterly West. He is a contributing editor to Barrow Street, and works at the Museum of Modern Art in New York City. 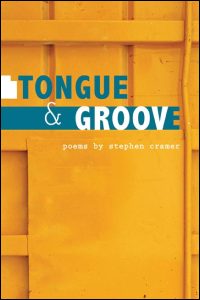 "In Shiva's Drum there are poems of sheer beauty--read ‘1963' and ‘Sunday,' for examples--in which language is forced up by passion and blue notes soar. Indeed, a new music rises here, at times plaintive, at other times harsh and discordant, always memorable. In ‘What We Do,' a kind of ars poetica, Cramer observes a street drummer: ‘These sounds the music wants / to encompass, make its own, / so in the end, you can't tell if he's playing / the drums or if they're playing him.' This is an exciting book."--Grace Schulman

Finalist for the Balcones Poetry Prize, 2004.