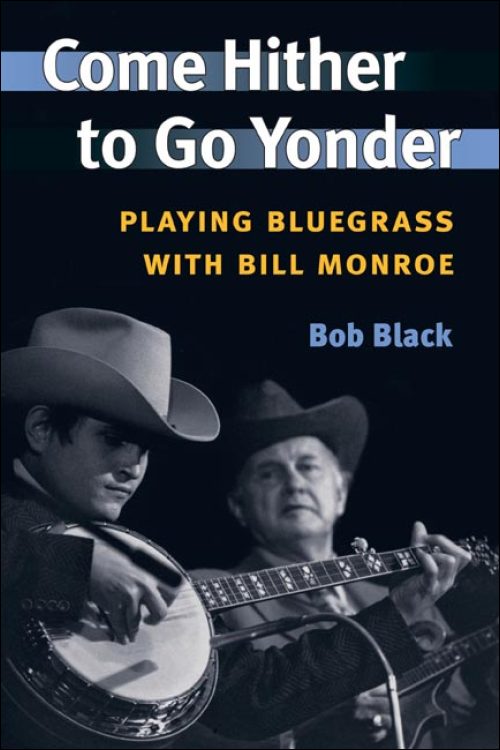 Bob Black was a member of Bill Monroe's Blue Grass Boys in the 1970s. Black's memoir of his time with the man he called the Chief offers the unique vantage point of a man who traveled and performed extensively with the Father of Bluegrass at a time when the music had opened up to new audiences--and Monroe had become a living legend.

Both role model and taskmaster, Monroe exerted a profound influence on Black and the musicians who have carried on the bluegrass tradition. In addition to Black's one-of-a-kind story, Come Hither to Go Yonder includes complete listing of Black's appearances with Monroe, recollections of the memorable experiences they shared while working together, descriptions of other important musicians and bands, and suggestions for further reading and listening.

Offering a rare perspective on the creative forces that drove one of America's greatest composers and musical innovators, Come Hither to Go Yonder rewards fans of Bill Monroe and bluegrass while offering an insider's view of a crucial time in the music's history.

Bob Black played banjo as one of Bill Monroe's Blue Grass Boys and recorded with him on the Weary Traveler album. Black later played for several years with Buck White and the Down Home Folks. He appears on a number of fiddle albums by Kenny Baker and has performed with Ricky Skaggs, Ralph Stanley, Rhonda Vincent, Marty Stuart, Frank Wakefield, John Hartford, the Whites, and other artists. In 2002, he received the Iowa Arts Council's Traditional Arts Award. Neil V. Rosenberg is the professor emeritus of folklore at Memorial University of Newfoundland. His books include Bluegrass Generation: A Memoir and Bluegrass: A History.

"Black writes clearly, in an easy-to-read and entertaining style. His portrait of Monroe is perceptive and sensitive, valuable because of its close perspective and also because Black has a different take on the man than many previous Monroe documentarians. A must-read for Monroe fans."--Bluegrass Unlimited

"Bob gives the reader insights into traveling with the band and life on the road. . . . It is obvious that Bob Black cherishes his time with the Blue Grass Boys and his mentor Bill Monroe. Come HIther to Go Yonder is the fascinating story of bluegrass before the phenomenon of Oh Brother."--Sing Out!

"I believe Bob Black is the best playing fiddle tunes of any banjo player."--Bill Monroe

"Anyone intersted in bluegrass and Bill Monroe will find Black's reminiscences of his time beneath a Blue Grass Boy hat absorbing."--Tony Russell

"Being a bluegrass banjo player and Monroe fan for most of my life, I found it easy to project myself into the situations and encounters that Black describes. . . . This is a stimulating and thoroughly enjoyable book that I would recommend to anyone interested in Monroe's music."--Tom Adler, folklorist and bluegrass historian

Bob Black was named the International Bluegrass Music Association Print Media Personality of the Year for his book (2006).