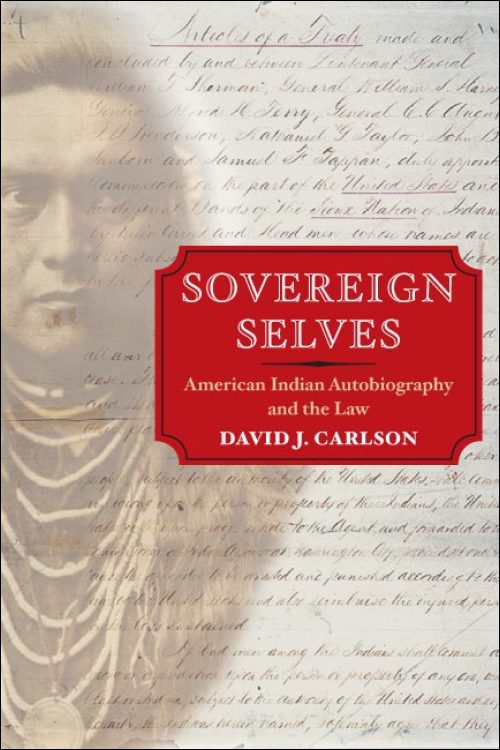 This book is an exploration of how American Indian autobiographers' approaches to writing about their own lives have been impacted by American legal systems from the Revolutionary War until the 1920s. Historically, Native American autobiographers have written in the shadow of "Indian law," a nuanced form of natural law discourse with its own set of related institutions and forms (the reservation, the treaty, etc.). In Sovereign Selves, David J. Carlson develops a rigorously historicized argument about the relationship between the specific colonial model of "Indian" identity that was developed and disseminated through U.S. legal institutions, and the acts of autobiographical self-definition by the "colonized" Indians expected to fit that model.

Carlson argues that by drawing on the conventions of early colonial treaty-making, nineteenth- and early twentieth-century Indian autobiographers sought to adapt and redefine the terms of Indian law as a way to assert specific property-based and civil rights. Focusing primarily on the autobiographical careers of two major writers (William Apess and Charles Eastman), Sovereign Selves traces the way that their sustained engagement with colonial legal institutions gradually enabled them to produce a new rhetoric of "Indianness."

"Sovereign Selves was a joy to read. This is an original and very exciting work from a gifted interdisciplinary scholar, and I was particularly impressed by the illuminating analysis and in-depth treatment of a broad range of American Indian writers and important historical figures. Any reader interested in American Indian law and policy or literature will find this book very rewarding and insightful."--Robert A. Williams, author of The American Indian in Western Legal Thought: The Discourses of Conquest

"I know of nothing else quite like this stimulating work. Good arguments expounded through good writing ground Carlson's convincing argument that 'engagement with colonial legal discourse is central to the development of early Indian autobiography.'" --Jace Weaver, author of That the People Might Live: Native American Literatures and Native American Community