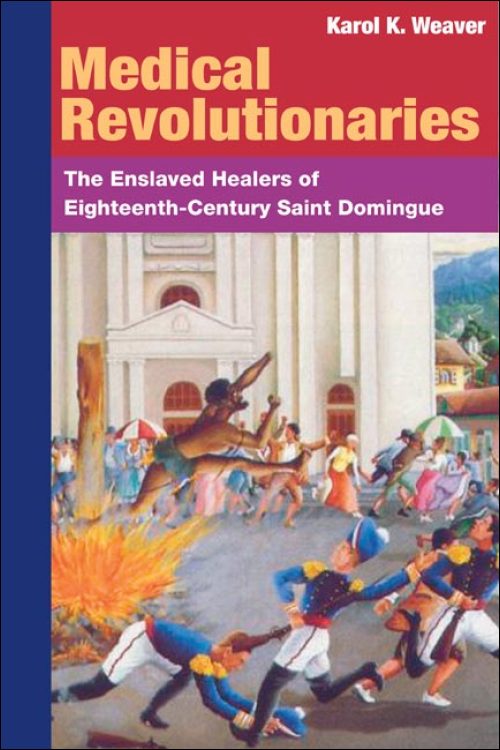 Herbalists, diviners, nurses, midwives, and veterinary practitioners flourished in the medical world of eighteenth-century Saint Domingue. Using Western, African, and Caribbean remedies, they treated the maladies of slaves, white residents, and animals. While these enslaved medical practitioners were an important part of the plantation economy and colonial prosperity, they ultimately roused their fellow slaves to rebel against and overthrow French rule.

Karol K. Weaver's Medical Revolutionaries asserts that understanding the origins of the Haitian Revolution--one of the most important political events of its time--requires understanding the role of these healers in inspiring and actually leading the overthrow. Weaver explains that the enslaved healers emerged as significant leaders of slave communities through a process of cultural retention, assimilation, and creation. The healers profited economically from their practices and used their position to conceive and implement an ideology of resistance via the destruction of human and animal life, occupational sabotage, and terrorism.

Karol Weaver is an assistant professor of American history and the history of medicine at Susquehanna University.

"Importantly, Medical Revolutionaries is an excellent resource for those studying colonialism, shedding new light on the thinking behind changed medical practices and presenting idea of colonial behavior as much more complex than hegemony over the colonized. . . . Medical Revolutionaries is a story of the co-opting of healing for revolution and is a valuable book for those interested in topics related to globalization, post colonial studies, nursing, medicine, and history."--Nursing History Review

"Medical Revolutionaries is a flawlessly written work that should be of interest to a wide variety of scholars and non-scholars alike."--Journal of African American History

"The interdisciplinary thrust of the text is commendable and its careful languaging makes it accessible to a wide audience. . . . This self-reflexive text . . . necessarily broadens our knowledge and understanding of medicine, liberty and the Caribbean."--Caribbean Studies

"This slim volume manages to touch on a wide range of fascinating topics: Creole medical cultures, the impact of slavery, the relationship between medicine and power, gender, the legacy of colonial medicine in contemporary Haiti, and even historical memory."--H-LatAm