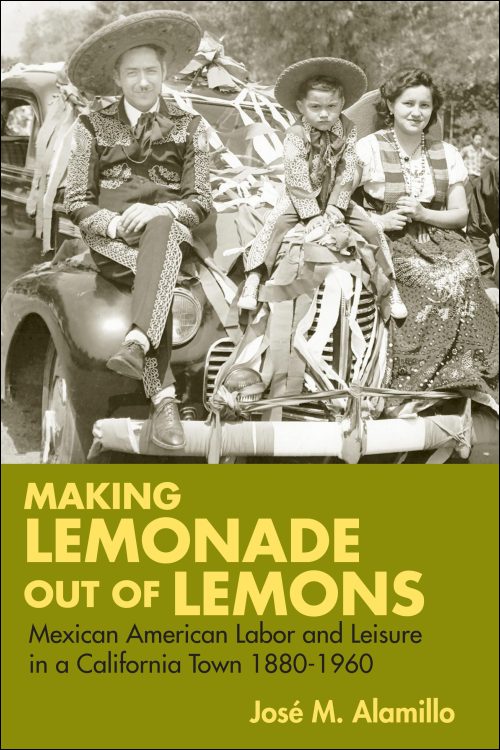 Making Lemonade out of Lemons

Out of the “lemons” handed to Mexican American workers in Corona, California--low pay, segregated schooling, inadequate housing, and racial discrimination--Mexican men and women made “lemonade” by transforming leisure spaces such as baseball games, parades, festivals, and churches into politicized spaces where workers voiced their grievances, debated strategies for advancement, and built solidarity. Using oral history interviews, extensive citrus company records, and his own experiences in Corona, José Alamillo argues that Mexican Americans helped lay the groundwork for civil rights struggles and electoral campaigns in the post-World War II era.

José M. Alamillo is a professor and chair of Chicana/o Studies at California State University Channel Islands. He is the author of Deportes: The Making of a Sporting Mexican Diaspora.

"In describing how leisure activities helped create bonds of community solidarity, Alamillo adds an important dimension to our knowledge of Mexican American history and California history. . . . This book demonstrates how community-based oral history techniques can breathe new life into the writing of history."--American Historical Review

"Making Lemonade out of Lemons, an engaging community study of a Southern California citrus town, shifts attention to the leisure hours of pickers and packers, the realm where they exercised the most autonomy over their lives. . . . Alamillo uses oral interviews and local newspapers to reconstruct the vibrant social and cultural life that working men and women erected out of their employer's earshot."--Journal of American Ethnic History

"In this rich social history of the Mexican community of Corona, California, Jose M. Alamillo develops the literal and metaphorical power of a cliché. . . . Alamillo masterfully weaves a gendered analysis of labor, leisure, and household into his description of the ethnic Mexican community. . . . Making Lemonade Out of Lemons underscores the importance of Chicano/a history to understand the American West. Alamillo succeeds in adding the element of race to the development of industrial agriculture in the urbanizing West."--Western Historical Quarterly

"This book has been necessary for a good while. . . . Alamillo fills part of the considerable literature gap on Latina/Latino and US Southwestern community and labour history."--Left History

"A lively narrative that makes a solid contribution to Mexican American and U.S. labor history. Alamillo adds a fresh voice to our knowledge of how and why Mexican American political action blossomed in the latter half of the twentieth century."--Aztlan: A Journal of Chicano Studies

“I’ll never again squeeze a wedge of lemon into a glass of iced tea without thinking of this book. José Alamillo’s engaging narrative explores the ‘spaces of congregation’ where citrus workers came together to play and, in the process, learned leadership and organizing skills that carried over into union and civil rights campaigns. . . . Making Lemonade out of Lemons is a clear-eyed, unromantic study of California citrus workers’ labor and leisure, a model of lucid prose and complex analysis.”--Mary Murphy, Michael P. Malone Professor of History, Montana State University