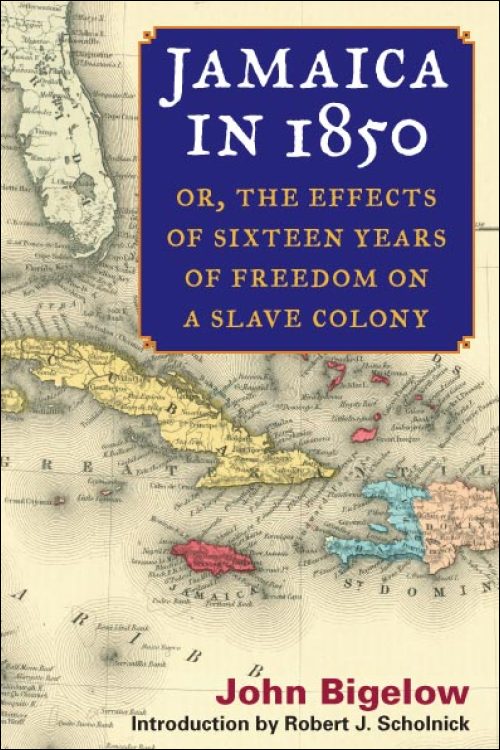 or, The Effects of Sixteen Years of Freedom on a Slave Colony
Author: John Bigelow
Introduction by Robert J. Scholnick
The double-edged sword of emancipation and the truth about its effects
Paper – $57
978-0-252-07327-4
Paperback: 06/12/2006
Buy the Book Request Desk/Examination Copy Request Review Copy Request Rights or Permissions Request Alternate Format Preview

After Jamaican slaves were fully emancipated in 1838, the local economy collapsed. Driven by a belief in the innate inferiority of the black race and bolstered by this apparently disastrous Jamaican example, Americans who defended slavery convinced many that emancipation at home would lead to economic and social chaos. Collecting John Bigelow's vivid firsthand reporting, Jamaica in 1850 challenges that widely held view and demonstrates that Jamaica’s troubles were caused not by lazy blacks but by the incompetence of absentee white planters operating within an obsolete colonial system. Bigelow also shows that although large plantations languished, many former slaves worked tirelessly and became successful small-scale landowners.

The power of these arguments made John Bigelow's Jamaica in 1850 a crucially important document in the American antislavery struggle both in America and Britain. Robert J. Scholnick's introduction places the book within transnational debates about Emancipation, slavery, colonialism, and economic development in the antebellum period and considers its powerful impact in furthering the antislavery cause.

John Bigelow (1817-1911) was an editor at the New York Evening Post and an organizer of the Free-Soil party. Robert J. Scholnick is a professor of English and American studies at the College of William and Mary. He is the author of books including Edmund Clarence Stedman.

"Jamaica in 1850 is easy to read, absorbing and most enlightening. . . . [and] considered a brilliant expression of [Bigelow's] commitment to freedom, democracy and racial equality."--Sunday Gleaner

"Very few books have the scope of Jamaica in 1850. . . . To support his conclusion that slavery had blinded the planters to the economic inefficiencies of the plantation system, Bigelow used graphic descriptions, sound economic arguments, and persuasive logic."--Journal of African American History